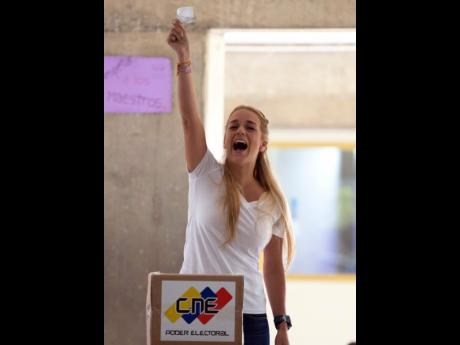 AP
Lilian Tintori, the wife of jailed opposition leader Leopoldo Lopez, yells in Spanish: "For the freedom of political prisoners" as she holds up her electronic voting receipt before placing it in a box during congressional elections in Caracas, Venezuela, on Sunday. 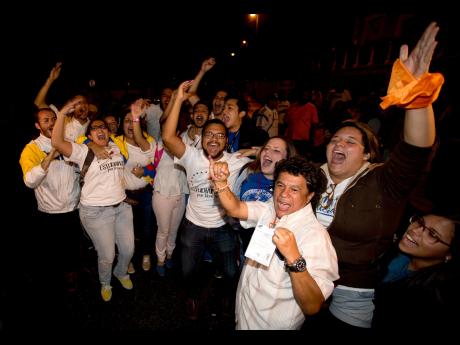 Venezuela's opposition won control of the National Assembly by a landslide, stunning the ruling party and altering the balance of power 17 years after the late Hugo Chávez kicked off the nation's socialist revolution.

The opposition coalition won at least 99 seats in the incoming 167-seat legislature, electoral authorities announced early yesterday. The ruling socialist party won 46 seats. The opposition coalition needs to take 13 of the 22 remaining races to give it a two-thirds supermajority needed to strongly challenge President Nicolas Maduro's grip on power.

The streets of the Venezuelan capital of Caracas broke out in shouts of joy, fireworks and car honking after National Electoral Council President Tibisay Lucena announced the partial results six hours after polls closed. In the plaza in wealthy eastern Caracas that was the epicentre of last year's bloody anti-government protests, a small group of opponents, some of them sipping champagne, burned red shirts that are the obligatory revolutionary attire.

Within seconds, Maduro recognised the opposition's win, saying that despite an adverse result Venezuela's democracy had triumphed. But he recalled the long history of US-supported coups in Latin America in blaming the "circumstantial" loss on a conservative "counterrevolution" trying to sabotage the oil-dependent economy and destabilise his rule.