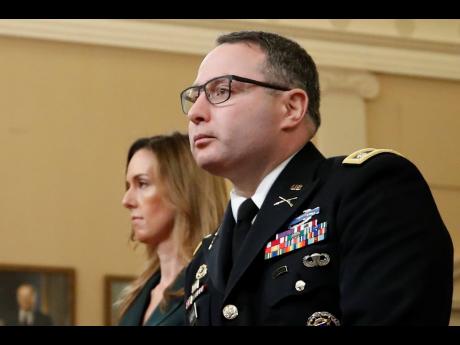 Alex Brandon
Jennifer Williams, an aide to vice-president Mike Pence, and National Security Council aide Lt Col Alexander Vindman, arrive after a break in their testimony before the House Intelligence Committee on Capitol Hill in Washington on Tuesday.

One top national security aide who listened to President Donald Trump’s July call with Ukraine’s president called it “improper”. Another said it was “unusual”. The two testified Tuesday at House impeachment hearings as the inquiry reached deeper into the White House.

Lt Col Alexander Vindman, an army officer at the National Security Council, and Jennifer Williams, his counterpart at Vice-President Mike Pence’s office, said they had concerns as Trump spoke on July 25 with the newly elected Ukrainian president about political investigations into Democrat Joe Biden.

“What I heard was inappropriate,” Vindman told lawmakers.

The two led off a pivotal week featuring testimony from nine witnesses in all as the House’s impeachment inquiry accelerates. Democrats say Trump’s pressure on Ukraine to investigate Democrat Joe Biden as he withheld US military aid that Ukraine needed to resist Russian aggression may be grounds for removing the 45th president.

Trump says he did no such thing in his call with President Volodymyr Zelenskiy and the Democrats just want him gone.

Vindman, a 20-year military officer arrived at Capitol Hill in military blue with a chest full of service medals, and said he reported his concerns “out of a sense of duty”.

He did so, he said, “because they had significant national-security implications for our country.”

Williams, a career State Department official who has worked for three presidential administrations and counts former Secretary of State Condoleezza Rice a “personal hero”, said the phone call was the first time she had heard anyone specifically seeking investigations from Ukraine.

“The reference to Biden sounded political to me,” she said. Williams said the call was “unusual because the specific reference to Joe Biden and his son Hunter “struck me as political in nature”.

Vindman, an immigrant who arrived in the US as a toddler from Ukraine, told the panel he was grateful his father brought the family to the US 40 years ago and for “the privilege of being an American citizen and public servant, where I can live free of fear for mine and my family’s safety”.