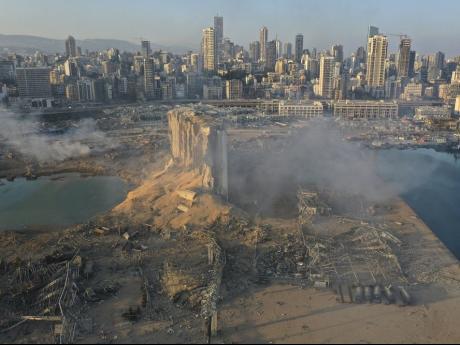 A drone picture shows the scene of an explosion at the seaport of Beirut, Lebanon, Wednesday, August 5, 2020. A massive explosion rocked Beirut on Tuesday, flattening much of the city's port, damaging buildings across the capital, and sending a giant mushroom cloud into the sky. (AP Photo/Hussein Malla)

BEIRUT (AP) — Investigators probing the deadly blast that ripped across Beirut focused Wednesday on possible negligence in the storage of tons of a highly explosive fertiliser in a waterfront warehouse, while the government ordered the house arrest of several port officials.

International aid flights began to arrive as Lebanon’s leaders struggled to deal with the widespread damage and shocking aftermath of Tuesday’s blast, which the Health Ministry said killed 135 people and injured about 5,000 others.

Public anger mounted against the ruling elite that is being blamed for the chronic mismanagement and carelessness that led to the disaster.

The Port of Beirut and customs office is notorious for being one of the most corrupt and lucrative institutions in Lebanon where various factions and politicians, including Hezbollah, hold sway.

The investigation is focusing on how 2,750 tons of ammonium nitrate, a highly explosive chemical used in fertilisers, came to be stored at the facility for six years, and why nothing was done about it.

Losses from the blast are estimated to be between $10 billion to $15 billion, Beirut Governor Marwan Abboud told Saudi-owned TV station Al-Hadath, adding that nearly 300,000 people are homeless.

Hospitals were overwhelmed by the injured. One that was damaged in the blast had to evacuate all its patients to a nearby field for treatment.

It was the worst single explosion to strike Lebanon, a country whose history is filled with destruction — from a 1975-1990 civil war, conflicts with Israel and periodic terrorist attacks.