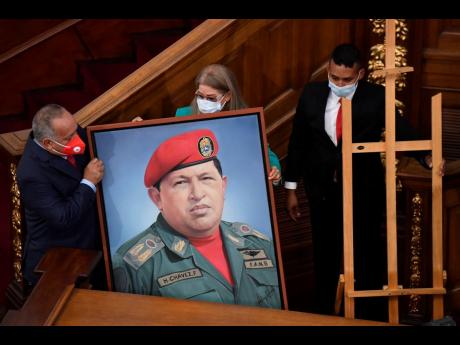 Nicolás Maduro was set to extend his grip on power Tuesday as the ruling socialist party prepared to assume the leadership of Venezuela’s congress, the last institution in the country it didn’t already control.

Maduro’s allies swept legislative elections last month boycotted by the opposition and denounced as a sham by the US, the European Union and several other foreign governments. While the vote was marred by anaemically low turnout, it nonetheless seemed to relegate into irrelevancy the US-backed opposition led by 37-year-old lawmaker Juan Guaidó.

Exactly a year ago, Guaidó, in a blue suit and tie, tried to scale a spiked iron fence to get past a group of riot police blocking him from attending the parliament’s inaugural session, which according to the constitution must be held every year on January 5.

A far cry from that electric display of defiance, Guaidó was expected to meet via Zoom with a cohort of opposition leaders for their own virtual parliamentary session.

Last month, anti-Maduro lawmakers, several dozen of them from exile, also gathered online to extend their mandate stemming from a landslide victory in 2015 for another 12 months, operating through an adjunct committee normally reserved for legislative recesses.

Supreme Court justices loyal to Maduro immediately struck down the law as invalid. But that hasn’t stopped the Trump administration from doubling down in its support of Guaidó.

“The national parliament will not be detained until there are free elections in Venezuela,” Guaidó said on Twitter recently.

While Guaido’s bravery hasn’t wavered, the opposition’s political fortunes have tanked as Venezuelans own hopes for change have collapsed. Recent opinion polls show support for Guaidó having fallen by more than half since he first rose to challenge Maduro two years ago.

Meanwhile, Maduro has managed to retain a solid grip on power and the military, the traditional arbiter of political disputes.

Gaby Arellano, a lawmaker exiled in Colombia, said that many in the opposition underestimated Maduro, thinking he stood no chance in a doomsday economic environment marked by hyperinflation, miles-long lines for gasolene and pulverised wages measured adding up to a few pennies per month.

But he’s managed to outmanoeuvre his foes through a mix of repression and co-optation exacerbated by the opposition’s own missteps, Arellano said. She expects a new round of repression now that Maduro has seized congress.