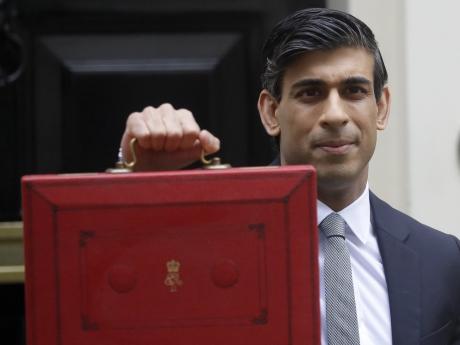 Britain's Chancellor Rishi Sunak stands with his red briefcase in front of 11 Downing Street in London, Wednesday, March 3, 2021. Sunak is expected to announce billions of pounds in tax cuts and spending increases to help workers and businesses hit by the coronavirus pandemic when he delivers his budget to Parliament on Wednesday. (AP Photo/Kirsty Wigglesworth)

LONDON (AP) — Britain’s treasury chief on Wednesday announced an additional 65 billion pounds of support for an economy ravaged by the coronavirus pandemic, extending job support programmes and temporary tax cuts to help workers and businesses in his annual budget.

Rishi Sunak said his plans for the next fiscal year would “protect the jobs and livelihoods of the British people” through September as the government slowly lifts lockdown restrictions that have shut businesses across the UK.

While the pandemic has pushed public borrowing to levels not seen since World War II, Sunak said it is too soon to cut government spending.

The British economy has shrunk by 10% over the past year and more than 700,000 people have lost their jobs.

Projections released Wednesday by the Office for Budget Responsibility show that the economy will still be 3% smaller five years from now than it would have otherwise been.

But Sunak said the government must start to get its finances in order so it doesn’t saddle future generations with unmanageable debt.

To do so, he announced plans to increase the rate of corporation tax to 25% in 2023 from 19% and freeze personal income tax thresholds, increasing revenue as inflation boosts incomes.

“An important moment is upon us,” Sunak told the House of Commons.

“A moment of challenge and of change. Of difficulties, yes, but of possibilities, too. This is a budget that meets that moment.”

Former International Monetary Fund chief economist Ken Rogoff compared the pandemic to a war and said the government should be looking at catastrophe relief.

“We are in the middle of a war and you should not be worrying excessively about the budget deficit and about debt,″ he told the BBC about his advice to Sunak.

“You can worry about that at the other side.″