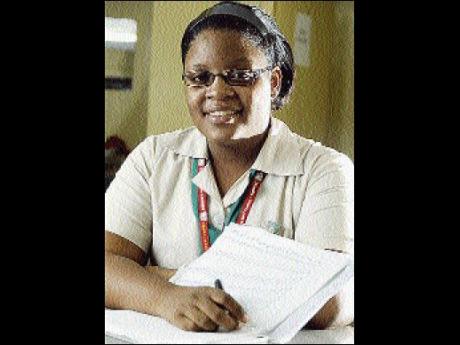 Shantal Pellington of Seaview Gardens spends much of her time reflecting on her future, and was caught off guard when her own short story about reflection won an award for best short story in Caribbean Secondary Education Certificate (CSEC) English.

Pellington waited for approximately three months after CSEC results were released before hearing about her achievement in the principal's office at Excelsior High School.

"I cried," Pellington said with a slight smile.

The 11th grader managed to dry her tears long before heading out on a four-day trip, which was part of her reward.

She travelled to The British Virgin Islands for the award ceremony, as well as Antigua and St Maarten.

"I liked St Maarten because I got to see the French side," she said.

Her former English teacher and mentor, Lorna Gordon, described the soft-spoken girl with a knack for story telling as "shy, very diligent and focused".

Radcliffe Haynes, Pellington's teacher at the time of her exam, said, "She is a natural, a special one."

Pellington sat upright with her legs crossed as she shared what her winning short story was about: a man caught up with reminiscing as he reflected on time he spent by his sister's grave.

While living with her mother, grandmother and brother, Pellington retreats to the laundry room for private time, where she can pen poems or stories.

While her stories may not normally stem from personal experiences, she could relate to the protagonist in her award-winning piece for CSEC.

"I understand emotions and feelings. I have time to think [and] time to reflect on things."

Pellington has flashbacks on her past but reflects mainly on her future. By coming out on top with her recent achievement, she will receive a scholarship for university. She said she intends to get her PhD in psychology. However, her dream is to practise journalism.

"I really like writing," she said, "and journalism brings out psychology."

Although always smiling, especially when she spoke of her future, thoughts of her friend who became ill a year ago brought a sombre expression to her face.

"I was just shocked," she said, looking down at her hands. "I couldn't believe this was my friend.

"She showed me something I wrote for her and I was so touched. I think it was a poem. I wrote it when I was about eight."

She cites this experience as what influenced her decision to study psychology as well as what keeps her writing.

Not only does she hope to give back through journalism one day, but she said she hopes to be able to give back to schools and students through charity.

Until then, Andrew Holness, minister of education, left her with a message of encouragement that will keep her going.

"The minister of education said to 'keep writing', and that stuck with me."