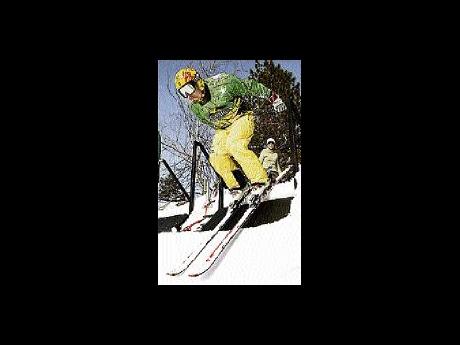 It's a race against time as Jamaica's ski-cross hopeful, Errol Kerr, is in jeopardy of missing this month's Winter Olympic Games in Vancouver, Canada, as he is still in need of approximately $5 million to participate at the showpiece event.

The US-born skier qualified for the games late last year and will be representing the island after he successfully secured a spot in the newly-added event, after a string of impressive performances all over the world.

Born to a Jamaican father and an American mother, 23-year-old Kerr represented the US ski team for several years before recently securing dual citizen status and clearance from the US ski authorities to represent the island.

Kerr's progress has been supported by the Jamaican government through the Sports Development Foundation (SDF), which has contributed just about US$30,000 ($2.6m) towards his participation at several meets last year. A number of private companies also gave a helping hand. However, there is a call for greater support as the California native gets set to launch his historic bid to secure Jamaica's first Winter Olympic medal.

Minister of Sports, Olivia 'Babsy' Grange, who described his bid as a great sports tourism catalyst for the island, is hoping that other state agencies and private partners will come on board in time to guarantee the skier's participation at the games.

"I'm hoping that the Jamaica Tourist Board will give him some support in this last stretch, and also the private sector, those that have not yet come on board," said Grange.

"He (Kerr) has actually indicated that he is so determined that he is willing to make whatever sacrifices are necessary to make it through to the Olympics. So even if we manage to raise US$30,000 ($2.6m) it will go a far way. It naturally will affect how his coach is paid and several other things."

Grange added: "I want to make a special appeal for him to be given support and I really don't want to experience the fact that if and when he medals everybody will be jumping on the bandwagon and yet it was such a struggle for him to go to the games because he did not get the full support."

In addition to other expenses, Kerr's coach/technician Eric 'Homey' Holmer has not been paid for a couple of months and funds are also needed to cover transportation and accommodation for the remainder of the season, which closes in April.

Jamaica Ski Federation president, Richard Salm, is hoping that the youngster will be able to secure the support and underlined his chances of actually medaling at the event.

"Any support that he can get will be welcomed at this time. Errol (Kerr) stands a very good chance of medaling and success so far is causing a lot of positive exposure for Jamaica. This is a great advert for the country and so I hope that he will get the support that he deserves," Salm offered.