Hopes hang on sugar in the Vere plains 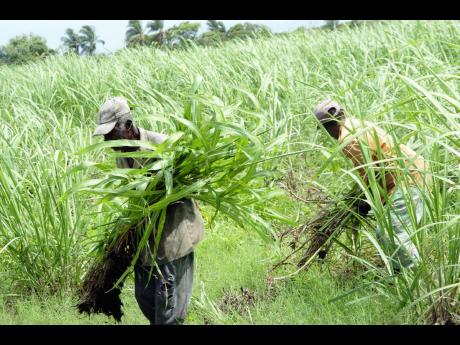 In this file photo, workers employed to the Monymusk Estate in Clarendon are seen removing overgrown weeds from a sugar cane field. - File 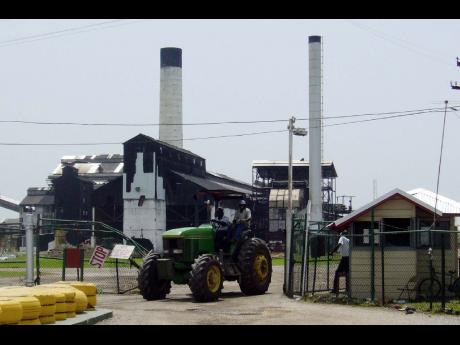 A frontal view of the Monymusk Sugar Factory in Lionel Town, Clarendon. - File
1
2

LIFE IS slowly returning to sugar production on the Vere plans of Clarendon. After several months of inactivity, the huge chimneys of Monymusk Sugar Factory began emitting smoke again in January, signalling the start-up of much needed work for hundreds of labourers in a farming community long reliant on sugar. It is a community that just months before was staring down the barrel of unemployment and uncertainty.

The uneasiness came on the heels of the declaration by the Bruce Golding-led government, shortly after taking office in 2007, that it was unwilling to continue shouldering the huge debt of the Sugar Company of Jamaica (SCJ), and sought to rid itself of the burdensome sugar assets through divestment.

Monymusk has been on the receiving end of a pre-shipment deal the Government struck with European sugar producer Eridania Suiss SA, a subsidiary of the Italian Maccaferri Group. The Geneva, Switzerland-based Eridania, which stakes claim to 30 per cent of the European sugar market, initially wanted to buy the Monymusk, Frome and Bernard Lodge factories and lands, but backtracked after its due diligence on the entities.

The St Thomas Sugar Estate at Duckenfield had earlier been sold to the Seprod/Fred M. Jones Estate consortium, while Long Pond and Hampden estates in Trelawny were acquired by Everglade Farms Limited in a second round sell-off. The aborted round one saw Infinity Bio Energy of Brazil, the preferred bidder for all the Government sugar assets, failing to muster the US$125 million they needed to clinch the deal.

Under the pre-shipment facility, the European Eridania provided US$15 million to fund the 2009/2010 crop in exchange for a government-guaranteed supply of 79,000 tonnes of sugar.

Monymusk got J$500 million in working capital to ready itself for the crop fertilising, planting fields, irrigating and retooling the factory.

When
Wednesday Business
visited the facility at the start of the sugar crop on January 6, general manager of Sugar Company of Jamaica Holdings, John Gayle, said focus was being given to those areas that were considered vital to the start of production.

Equipment upgrade include new mill rollers used for the crushing of the sugar cane, an overhaul of chains and carriers at the cane receival stations has been done and the processing house, where the cane juice is converted to sugar, now boasts brand new centrifugal baskets and clarifiers.

The Eridania lifeline is also helping the Monymusk factory to eliminate the need for bunker 'c' oil and is slated to slash by 50 per cent, through new tubing of its boilers, the need for Jamaica Public Service power to generate steam.

"Given that we could not do everything with the time and the kind of funding, we decided to deal first with the areas that will give us the biggest factory gains," Gayle said.

More than $300 million worth of equipment was also transferred from the shuttered Bernard Lodge factory in St Catherine.

Pans for gradual refurbishing of buildings are on the cards, even as they now get a face lift.

Monymusk Estate is situated on the Vere plains, often referred to as the irrigated plains. It is approximately 24 kilometres south of May Pen, the parish capital.

The sugar factory there started operations in 1901, as an operation owned and run by one Colonel C.J. Ward.

In 1916, ownership changed to Lindo Brothers, who retained it until 1928, when Clarendon Plantation Limited (CPL) took control. This was short-lived and, in 1929, the United Fruit Company assumed the management until 1936, when CPL returned, partnering with the Jamaica Sugar Manufacturing Company.

One year later, the ownership again changed hands, having being transferred to West Indies Sugar Company until 1976 when the state-owned National Sugar Farms commenced management under the name Clarendon Sugar Company Limited.

In 1984, the Government of Jamaica and Tate & Lyle Technical Services Limited entered into a 10-year management contract, and the assets of Monymusk were transferred to a new company, Jamaica Sugar Holdings Limited. By 1993 it was under full government control and management through the Sugar Company of Jamaica Limited

According to the Sugar Industry Research Institute, Monymusk contributed more than 3.3 million tonnes sugar or nearly 17 per cent of the 19.1 million tonnes of sugar produced in Jamaica from 1901 to 2005.

To get to the factory, one has to go through the busy commercial village of Lionel Town, which is located about a mile from the estate and has a population of almost 5,500.

Like a typical major Jamaican town, there is a police station, post office, hospital, service stations with shopping facilities within easy reach and at walking distance of the sugar-producing property. Residents of communities such as Race Course, Water Lane, Mitchell Town, Hayes and Salt River

transact business in Lionel Town instead of going to May Pen.

At some point in the past, there was a commercial bank, but residents say it relocated to May Pen "when things got slow at the factory".

Many persons who live in Lionel Town and nearby say business has been slow in the town for a long time, and Barbara, who has been living in the community since 1982 had no doubt where the blame should be placed.

"The factory doesn't have any impact on the town, and business is low, especially since they take away the bank," she said.

"Not even an ABM machine is here, so when the sugar workers are paid and have to go to May Pen to change their cheques, they just do all their spending there so the wholesales and other businesses here have been suffering."

It is the first full week of operations after the much-heralded "early start up" of the 2010 sugar crop, which is expected to yield 37,000 tonnes of sugar from 426,000 tonnes of cane, helped by sugar cane from Bernard Lodge.

But as a group of men sitting at a bar in the town pointed out to
Wednesday Business
, it is not an easy road to travel, even for canes, as the Salt River road from the Bernard Lodge estate to Monymusk is in a state of disrepair. This issue, they point out, was raised with the Minister of Agriculture and Fisheries Christopher Tufton the week before, when there was the official start of operations. The promise has been given that the problem would be "addressed over time".

Of the group of men relaxing, two are employed in the boiler room at the factory, but they declined to speak about their jobs or views of the restart of operations, fearing they could jeopardise their livelihood. But they all agreed that the town has been impacted negatively with the seeming decline of the sugar industry in their town, before this latest injection of hope.

One group member, who gives his name only as Stafford, does irrigation work at the estate. He is charged with ensuring that the crop in his assigned area gets sufficient water. Bur while he takes pride in his assignment, it is one made difficult by the recent and ongoing drought, mitigated in these parts only by the reactivation of more than 43 pumps and the realignment of irrigation canals. Repairs done to the estate's centre pivot irrigation line help to ensure his job is successfully carried out.

Stafford, who began working in sugar as a cane cutter five years ago, earning $78 per tonne is now taking home $198 per acre of irrigated plants. But he can neither explain details of, calculate his remuneration nor say how many acres he is in charge of.

"Mi glad the factory stay open," he said, now walking slowing among the long stalks of canes, examining the canals.

"If it was not for the factory, big man, things would be worse. Right now, anything but closure."

The conversation ended as quickly as it had started, as a pedal cyclist approached. Our visitor was an elderly man returning from Lionel Town bearing a bottle of kerosene oil and backpack that had clearly seen better days.

Our cyclist is Percival 'Maas Percy' Lewis, a 79-year-old pensioner, who said he began working at Monymusk in 1940, doing various jobs over the period.

'Mass Percy' said he lives on the estate with his family, in one of the houses provided for workers, and recalled that in his days as a cane cutter, he would be paid £6-7 per tonne for a fortnight.

"Those days were better," he argued citing what he said was the present-day 'heavy taxation' of sugar workers.

"Whole heap a money go into this place, but some only looking for them self," Lewis volunteered as he told of various place names and pointed out rock formations like a knowledgeable tour guide.

"They do what they want with the money and now they barely can stay open."

He has no faith in the current arrangement between the Government and the Italians, believing, he said, that only full private ownership can make a viable business of sugar at Monymusk.

A younger cyclist pulled over and, after receiving a reassuring nod from Lewis, introduced himself as Calvin Reid, who, appearing to be in his mid-20s, does not know his correct age, remembering only that he had passed 21 years.

Reid was employed by a contractor to cut cane in the 2009 sugar crop and was paid $300 per tonne, he said. However, he was not so lucky this time around, failing to get selected among the more than 1,800 workers currently employed between the estate and private farmers. He had since turned to burning wood for coal to make a living.

Workers who we met on the job at Monymusk were generally unwilling to speak, all referring
Wednesday Business
to the property's management in well rehearsed lines.

There was one exception. Ken (his surname withheld on request) made Lionel Town his home after leaving his native St Mary in search of work 'some years now'. Starting off as a cane cutter, he now described his current job as 'a cultivation maintainer', which requires him to remove weeds from the roots of the young cane plants.

While not completely satisfied with how things are currently, Ken who says he is being paid $210 per acre for his work, is just grateful he has a job.

"A going back to mi work; to how things a run right now I cannot take the chance to talk to you anymore, because I cannot afford to lose mi hustling.

"I have seven pickney and one of the worse things is being unable to give to them, when them in need."

Ken is off to work again.

So with a lifeline from Eridania for this crop, and an uncertain future beyond that, the prayers of hundreds of workers and their families in the communities on the Vere plains is that this is a lasting turn for the better.