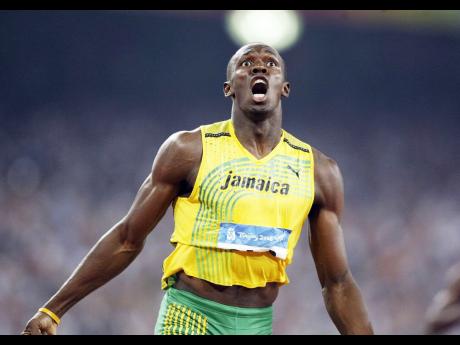 Usain Bolt's handlers are considering the offer of a honorary doctorate for distinction in sport from the Queen's University in Belfast, Northern Ireland.

Carole Beckford, the local publicist for the world's fastest man over both the 100 and 200 metres, in confirming the offer yesterday, said the Bolt camp is in discussions with the university.

"The offer is on the table and we have 18 months in which to consider it," Beckford said.

In explaining how the process works, she said: "... They write to you to say they are considering, then they publish the list. ... They obviously would want it to coincide with their graduation but because of Usain's schedule ... it may not coincide with what they want."

Honorary graduate awards from Queen's University, Belfast, are usually handed out during the first week of July. Bolt is, however, expected to appear at several meets on the new and lucrative IAAF Diamond League circuit during the same period. The fifth Diamond League meet, the Prefontaine Classic in Eugene, Oregon is set for July 3.

The world's top athletes then travel to Lausanne, Switzerland for the Athletissima 2010 on July 8 before moving on to Gateshead in England for the British Grand Prix. Paris, Saint-Denis for the Meeting Areva on July 16 is the next stop for the world's elite athletes. Early and mid-July should therefore be a hectic period for Bolt.

According to a press release from the Queen's University, Bolt is one of several famous men who are being offered honorary doctorates this year. They include Nobel prize-winners Professor Amartya Kumar Sen, one of the greatest intellectuals of modern India, former Finnish President Martti Ahtisaari, a veteran diplomat who played a major role in the Northern Ireland peace process and BBC broadcaster Sir Mark Tully, the BBC's India correspondent for many years.

Bolt has collected several awards since his triple gold medal winning performance at the 2008 Beijing Olympics. Last year he received the island's fourth highest honour, the Order of Jamaica, and was named the IAAF's Male Athlete of the Year for the second year in a row.

At the 2009 IAAF World Championship in Berlin, Bolt smashed his own world records in winning the 100m and 200m. He took home a third gold medal as a member of the sprint relay team.