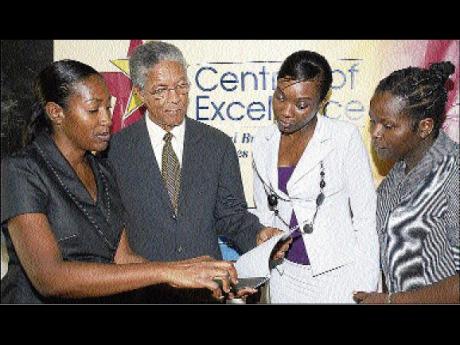 In today's school environment, student behaviour is a serious concern and some students leave primary and high schools without proper reading skills.

To combat the issue, greater emphasis is being placed on the role of guidance counsellors in influencing the total development of students.

"Guidance counsellors are the best placed and equipped educators to assist classroom teachers with management and student development," Antoinette Brooks, assistant chief education officer with responsibility for guidance and counselling in the Ministry of Education, said recently.

According to her, "The basic needs of students must be met for them to learn effectively."

Brooks was the co-presenter at a one-day workshop targeting guidance counsellors, and aimed at enhancing the learning environment, in six non-traditional high schools. The training session was held at Manchester High School under the auspices of the Ministry of Education and the Mutual Building Societies Foundation (MBSF).

The counsellors were from McGrath High School in Linstead, St Catherine, and the Mile Gully High School in Manchester, the initial participants in the MBSF's Centres of Excellence project, since 2008.

"The Centres of Excellence concept is geared at transforming the delivery of education in non-traditional high schools," said Dawn Sewell-Lawson, assistant programme manager at the MBSF.

The programme's main aim, she said, is to incorporate all facets of the school environment into the educational process.

"Under the Centres of Excellence project, one of our objectives is to incorporate guidance counsellors into learning and development, so counsellors can assist in evaluating students' learning styles and in early identification of behavioural issues," said Sewell-Lawson

The workshop, according to Sewell-Lawson, served to reinforce methodologies already being used by many of the counsellors.

In addition, there was need to highlight guidelines about collecting and using data to effectively monitor student development.

"Often it's only when the students get into a fight or fuss that the guidance counsellor intervenes. They do have preventative programmes, but in terms of knowing your student and being able to target specific intervention programmes to them, that has been missing because the counsellors don't have the data to monitor the students," Sewell-Lawson explained.

Outlining five points, Sewell- Lawson explained that schools needed the support of counsellors to incorporate an "evidenced-based culture" to plan and develop early-warning mechanisms that could identify negative behaviour in students on entry to schools.

Secondly, schools also needed the support of counsellors to help students to understand their responsibility in their education. Thirdly, programmes should be established to encourage parents' participation in the learning process.

Fourth came the idea of institutionalising the social curriculum to enhance the school environment.

the strengthening of the support of civic groups in schools was the last point in the plan.

Llewelyn Bailey, programme manager at the MBSF, said that these targeted interventions could transform the schools into becoming models of educational excellence.

David Powell of Porus High School welcomed the new initiatives being promoted by the MBSF and said that, of the five points emphasised at the workshop, he would immediately be seeking to widen parents' participation in school activities. "I'll be doing that to foster unity and to stimulate growth in the performance of our students," he said.

Mark-Shane Francis, guidance counsellor at the McGrath High School, said he would also be seeking to incorporate a strategy to increase parents' participation in designing the school's development plan.

"We plan to have some of our parents act as wardens to help around the school; and, although that may cost us, it would be worth the expenditure," said Francis.

The MBSF, a joint effort of the Jamaica National Building Society and the Victoria Mutual Building Society, has allocated $100 million to support the initiatives of the six schools over a five-year period, The Centres of Excellence initiative is slated to end in 2012. The findings and results of the MBSF intervention are being carefully documented for ongoing implementation, hopefully for all comparable schools.