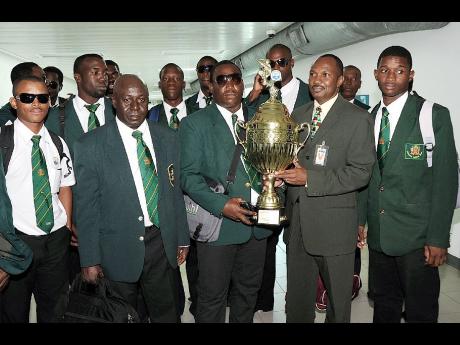 Tamar Lambert (centre) captain of Jamaica and Paul Campbell (third right), president of the Jamaica Cricket Association, hold the Headley/Weekes Trophy at the Norman Manley International Airport last week, when the team returned after completing their title triumph in the Eastern Caribbean. Coach Junior Bennett (second left, front) and other members of the team, look on. - Ian Allen/Photographer

Jamaica Cricket Association (JCA) president, Paul Campbell, says Jamaica has no interest in withdrawing from the West Indies Cricket Board (WICB) to go it alone in international cricket.

This despite the country recently recording a 'three-peat' in the regional four-day championship; and the success of Trinidad and Tobago in last year's inaugural Twenty20 Champions League tournament in India.

According to Campbell, such a move would erode the history and tradition of West Indies cricket, force Jamaica to play in International Cricket Council (ICC) affiliate competitions to qualify for world tournaments and take players off the international circuit for close to five years.

"Our efforts and attention, despite our recent successes, will be focused along with the line of improvements to Jamaica and, by extension, West Indies cricket," he added.

After the championship was reduced to one round of games across the home territories of the seven competing teams due to lack of finances, Jamaica triumphed after winning five of their six matches, four of which were away from home by huge margins, several by an innings.

This, coupled with the fact that during last year's 12-game home and away event the team won with two rounds to spare has had some pundits questioning the validity of maintaining a weak West Indies team, as opposed to buidling a strong Jamaican one capable of holding its own at the international level.

"If you understand the construct of world cricket, if a country decides to go it alone, its players would be off the international stage for a period of time," Campbell said.

"It means that Jamaica would have to start at the level of an associate playing nation, seeking to qualify for ICC affiliate tournaments. If you are talking about limited overs Twenty20 or one-day cricket international, it could take five years or so.

"If you are looking to play Test cricket it could take 10 to 15 years," he added.

The talk of individual territories going it alone is not limited to Jamaica, as following the success of Trinidad in the Champions League, in which they made it to the final, the topic has taken on legs across the region.

The Champions League featured teams such as New South Wales and Victoria of Australia, Sussex and Somerset of England, Cape Cobras and Diamond Eagles of South Africa, and Deccan Chargers and Delhi Daredevils of India.

In an interview with the cricket website
cricinfo.com
following the tournament, Trinidad and Tobago's captain, Daren Ganga, said: "I am not one to jump on a bandwagon and say Trinidad & Tobago should go on its own, but there has to be some involvement on the part of all stakeholders to protect West Indies cricket.

"It has to be invested in, in the right manner, and some firm decisions need to be taken about moving our cricket forward. And those are issues that need to be addressed now. Because I tell you, if that doesn't happen, it is inevitable that countries may go separately," he concluded.

Campbell, in the meantime, added that the only way forward for cricket in the region was a strong Windies team.