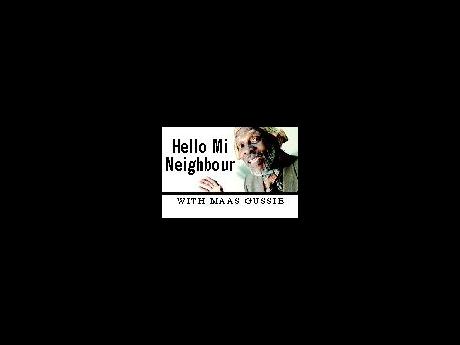 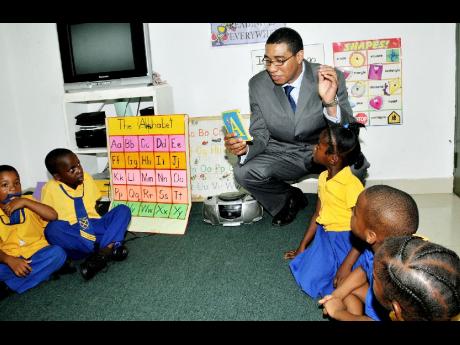 Education Minister Andrew Holness plays teacher with students of the Majesty Gardens Basic School in southwestern St Andrew last Friday. The occasion was a handover ceremony for a cheque for more than $1 million from the Steve Harvey Foundation to assist the school. The foundation is a non-profit organisation that seeks to improve public schools in urban areas by upgrading facilities and purchasing educational material. - Contributed
1
2

Hello, mi neighbour! It is widely believed that people who live in poverty are under a curse. They are always receiving handouts and never seem to have good jobs. Their houses are always leaking or lack some basic necessities: doors, windows, zinc, etc. Most times they are at the mercy of others. Usually, they are not welcome at the table of the rich or the gate of the influential. And by the way, had it not been for the poor, there would hardly be any rich. Pick up on this another time.

This so-called curse is exacerbated by poor people who have condemned themselves to hopelessness. They have never stopped to think that poverty can work in their favour. Can it? Yes, it can! Many millionaires will tell you that they grew up in poverty. They went to school barefooted, with one shirt on their back and neither lunch money nor text books.

They had no rich friends. They slept on the floor at night and their evening meal often consisted of a tough cracker and a little sugar and water. How other people could afford so much and their family so little bothered their young minds. "Nuh min', mi chil', one day God will smile on us" was the line often used to console their little hearts. "Why was God always smiling on those wicked people and not on us?" was always met with silence. Such was part of their early upbringing.

As they wrestled with tough questions, deep down in their hearts they knew they had to find a way out of poverty. And what was their strongest motivator? Poverty itself!

Winston, who is doing very well today as a business leader, said poverty inspired him not only to attend school but to do well. He wanted to be successful in life so that poverty would not prevent him from enjoying God's creation. He believes that if it worked for him, it could work for anyone else. Sometimes the deeper the poverty, the stronger the motivation to PUSH - push until something happens!

It would not be unreasonable to conclude that poverty is often viewed as a curse by the lazy and a cure to those who are otherwise-minded. You would have heard about the donkey that fell into a pit and could not be rescued. Its owner decided that he would solve the problem by just covering the animal with dirt. For every shovel of dirt that was thrown on the donkey, the smart animal shook it off and stood on it. After an hour or so, the donkey was out of the pit. What was intended to work against it worked in its favour!

People who live in poverty must begin to recognise the power of poverty. Don't just sit there and look at poverty! Look through it and see what's awaiting you on the other side.

There are numerous opportunities in this column to help a neighbour out of poverty. Make a difference today!

Thanks to these neighbours

1. Ann-Marie, Clarendon, for assisting a woman who is six months pregnant and in need of clothing.

3. Mr Smith, for donating a radio to a neighbour.

5. Sandra, St James, for offering drapes to a neighbour.

6. Lisa, for offering adult clothing to a woman.

7. Mr Watson, St Catherine, for offering a walker and children's clothing to Michelle.

8. Charmaine, for assisting with the cost of child's birth certificate.

9. Pamella, St Andrew, for offering a car safety seat to the Andersons for their young child.

1. A man with sickle-cell disease who lives alone and cannot help himself is in need of food and a bed.

2. Ms Morris, St Catherine, mother of five, is asking neighbours for help with second-hand furniture, food, bed for self and children - ages 14, 13, 11, seven and three.

3. Ann-Marie, Clarendon, is six months pregnant and asking for clothing for baby; also in need of food and clothing for self and other children aged five and one and a half.

4. Heather, St Catherine, who, along with her husband, is unemployed, is requesting a bed for the family. They have three children.

5. Maureen, Kingston, is asking for a dresser for a relative in the country; woman just had a baby whose father is not working.

6. Shelly-Ann, St Ann, wants to sell bagged juice, etc. to help with son's schooling; asking for help with start-up capital and a refrigerator.

7. Neighbour, Kingston, recently separated from her husband; trying to start from scratch. She needs a bed.

8. Lorna, St Mary, mother of seven, needs a dining table and a bed.

9. Desperate mother in need of a stroller for child with cerebral palsy; bed base for children also needed.

13. Neighbour, 88, is unemployed; asking neighbours for a Bible with large print.