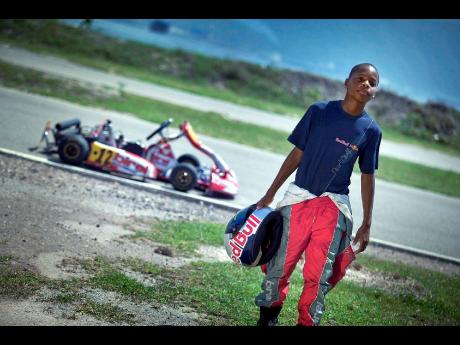 Although they did not take a slice of the over US$130,000 in cash prize, Jamaica's young karters left the Championship Karting International (CKI) Florida Cup Series holding their head high, following some fairly impressive performances.

Red Bull athlete, 14-year-old Collin Daley Jr, who attends St. George's College, finished second in one of the two Rotax Junior Class finals he contested on the weekend, at the Homestead Speedway, Florida.

According to the points standings on the CKI website, the second place helped Daley finish fifth in the overall championship in the Rotax Junior Class.

The title went to Sebastian Ordonez, who scored 325 points. Another Jamaican, Matthew Williams, who was racing at that track for the first time, finished 13th on 23 points.

"It was an awesome performance," said Sammy Law, a member of the NG Racing Camp, who had predicted a podium finish for Daley.

Commenting on his son Matthew's performance, Neil Williams explained that if he had been accustomed to the track, it would have been a different scenario.

"We made the observation that each time he went out his lap times got better and better," said Williams, who believes that the overall performance of the Jamaicans was a positive sign for the Jamaica Karting Association (JKA).

The other members of the NG Racing Camp who took part were William Myers, who finished fifth and sixth in the two Rotax Mini-Max finals. This placed him fifth in the overall championship on 84 points, behind the class champion, Darlton Sergeant, who amassed 317 points. Jonathan Law, with 46 points, ended up in 10th place, while Thomas Issa ended in 13th place.

In the meantime, president of the JKA, Peter Rae, will be accompanying Issa, Justin and Joshua Sirgany, along with Adam Minott, back to the United States, where they will participate in the final leg of the Florida Winter Tour in Ocala.

The international exposure has now set the stage for an interesting showdown at the next local go-kart meet, which is scheduled for Sunday, March 28, at the Palisadoes International Raceway, Kingston.