Robbed of her joy 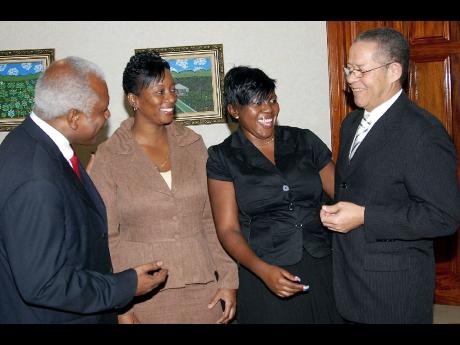 Prime Minister Bruce Golding (right) hosts Dhaima Brookes (second right) and District Constable Michelle Lewis (third right) at his office. National Coordinator of the National Transformation Programme, the Reverend Al Miller (left) also lunched with the prime minister and the women. Brookes, who is a legal secretary by profession, found $1 million at an ATM a few days after Christmas 2008 and turned in the money to the police. Lewis assisted her to transport the cash to the Waterford Police Station. She has been rewarded by the Guardsman Group for her returning the money. - File

The woman who was publicly celebrated for her honesty after she surrendered more than $1 million she found two years ago has been robbed of her only son by a gunman's bullets.

The pride Michelle Lewis felt in 2008 when an appreciative nation lauded her for her honesty gave way to numbing grief when her son's life was snuffed out a year later.

Gunmen snatched Juvann Livingston from his mother three days after he became 20, leaving her to bury her only child, ironically, a day before her birthday on November 20.

Lewis, a crime fighter, was participating in a police operation in Dunkirk, Franklyn Town, in eastern Kingston when the tragedy occurred.

"I can't believe that I would receive such a news. I thought that it would have been me, given the nature of my job," wept Lewis.

Lewis, a district constable, recalled how, in more pleasant times, the bag containing $1 million had been brought to her attention by another woman, Dhaima Brookes.

They both took the money to the Waterford Police Station and were swept up in the euphoria of the positive attention that came their way.

At the time, her son was showing great promise as an electrical engineer at the Jamaican-German Automotive School on Maxfield Avenue in the Corporate Area.

Sadly, a year later, on November 2, 2009, Juvann was caught in the wrong place at the wrong time.

"I was at work and had just got a call. When I reached home, I got the sad news that my son was dead," Lewis sighed.

She said she heard that Juvann had left her home in a section of Portmore to go to his father and grandmother's home in nearby Cumberland.

But he did not get there.

Juvann, clad in a white T-shirt, had borrowed a bicycle and was on Portmore Lane, between Westchester and Newlands, when he was accosted by two men, one of whom who shot him.

She said onlookers claimed that the intended victim had seen the attackers and fled, unbeknown to Juvann.

Lewis lamented that her mobile phone was turned off, as residents attempted feverishly to make contact with her.

The heartbroken mother is unable relieve herself of the guilt she continues to feel that she could have saved her son's life if she had heard the news earlier.

She was told that Juvann, who was shot in the arm and leg, had lain on a stretcher until he died while hospital administrators tried to prevent a man said to be improperly dressed from entering the Spanish Town Hospital.

"It was the person who had rushed Juvann to the hospital," she said.

Juvann's suspected attackers are now behind bars, with the next court date set for March 29.

But Lewis said she was apprehensive about venturing into the courtroom. "I always want to go to court, but I am afraid of breaking down."