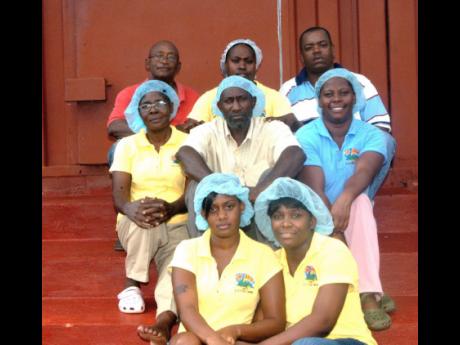 ST CATHERINE: Top Mountain Limited, a community-based income-generating enterprise located in St Catherine, has given residents hope by using resources that would normally go to waste as a means of economic empowerment.

Established three years ago from a 2001 grant of over $300,000 from the Social and Economic Support Programme (SESP), and a 2007 US$88,000 donation from the Japanese government, it produces fruit juices from mangoes that once would rot on the ground during mid-year.

"The member of parliament at the time (2001), Alethia Barker, gave the community $380,000 (out of her SESP allocation), and Mrs Nelly Richards, a social worker in the area, was given the task of identifying what we could do with the money," said salesman at Top Mountain Limited, Aston Thomas.

Thomas explained that Richards indicated that a processing plant could be built to process the fruits produced in the community. The project got off the ground with funding and training from RADA and a piece of land from Dr Rosalee Hamilton.

Three years later, the project has a staff of seven, supplies outlets in three other parishes and several towns in St Catherine, assisted with the recent refurbishing of a community meeting place, donated funds to the patching of roads in the community, and gave a grant of $50,000 to students in the community who passed their Grade Six Achievement Test.

At the inking of the agreement for the funding of the project, at the Japanese embassy in St Andrew in February 2007, then Ambassador to Jamaica, His Excellency Mashiro Obata, said that the lot of the Top Mountain citizen should improve with the project.

Office assistant at the facility, Tracy-Ann Whittle, who received on-the-job training at the factory, said originally, she was very curious about making juices, and now is able to make all kinds.

"We have survived here because of team spirit, honesty and communicating with each other," she said.

Joseph Nelson, who supplies juices to schools and other establishments in rural St Catherine, said before Top Juice, he had to travel miles to town centres to get the products.

"I have continued to do business here, because I have developed a relationship with the staff, and I have had good comments on the juice from consumers, and my supply is reliable," he stated.

Rural Agricultural Development Authority (RADA) manager for the Social Services and Home Economics Unit, Lorna Gooden, states that it was in 2000, while one of the project managers, Kiddo Smith, was assisting the community with a multimillion-dollar road project funded by the Jamaica Social Investment Fund (JSIF), that her agency saw the untapped opportunities in the area.

"They had a strong community organisation, and that made the effort much easier. We sent two persons to be trained at the Scientific Research Council in making jams and jellies and juices. We offered training in post-harvesting and we currently do follow-up training to ensure that whatever new technology is available can be passed on to them," she said.

For manager of the project, Zephaniah Kellyman, eyes were opened to what could be achieved through community activism, after the citizens' association, under the leadership of past president, Robert Brown, was able to get a long stretch of the community's road rehabilitated by the JSIF.