How the peace was won 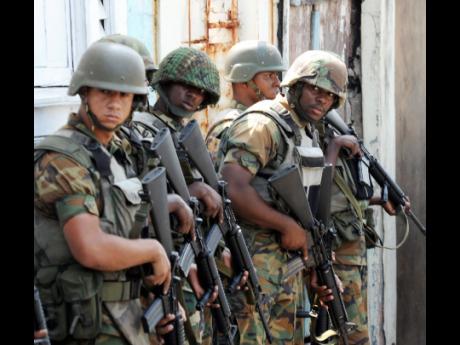 Soldier on patrol in Hannah Town. 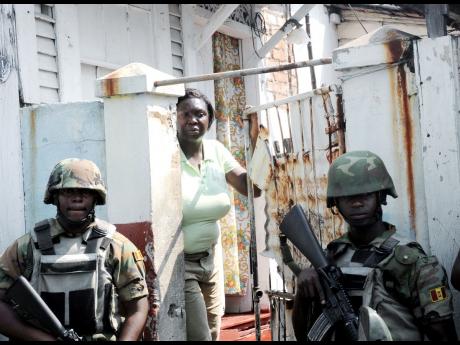 A resident of Hannah Town looks on while Jamaica Defence Force soldiers stand guard in the aftermath of a deadly gun battle between police and gunmen in West Kingston last week. - norman grindley/chief photographer
1
2

A POLICE armoured car at the corner of Rose Lane and Drummond Street was the only reminder last Thursday of the gunfight that took place at the Hannah Town-Denham Town border three days earlier.

Life, it seemed, was back to normal in the west Kingston community where two men were killed and three members of the police force shot in a gun battle.

The rattle of a Ludo game dice cup was the loudest sound to be heard, a stark contrast to Monday when the continuous gunfire could be heard many metres away.

Residents were mum on the incident when The Gleaner returned to the community, but claimed that the 'peace treaty' brokered with traditional political rivals in Denham Town two years ago was holding.

Calvin 'Yogi' Simmonds is an area leader in Hannah Town, which has traditionally supported the People's National Party (PNP), the parliamentary opposition.

He told The Gleaner that he and west Kingston heavyweight, Christopher 'Dudus' Coke, were part of the initiative that ended hostilities two years ago.

"Mi go to him and seh, 'Yow, Dudus, the war t'ing nah go work', an' him seh peace is the answer, but how much a wi have love inna wi heart," Simmonds recalled. "A him really strengthen di t'ing."

The 41-year-old Coke is the focal point of an extradition row between the Jamaican Government and authorities in the United States.

He is based in Tivoli Gardens, an area with fanatical ties to the governing Jamaica Labour Party (JLP).

Going by resident response, the 'peace treaty' has worked.

Even Inspector Oliver Humes, head of the Hannah Town Police Station, acknowledged this, saying only one homicide has been recorded there this year.

Simmonds, 47, grew up between Oxford and Drummond streets, which overlook Denham Town, the JLP stronghold.

When he was growing up, it was unheard of for anyone from Hannah Town to say something complimentary about Denham Town.

According to a gangly youth on Rose Lane, those days are over.

"Dem come a our dance, we go a fi dem dance," he said after a draw on what appeared to be a ganja spliff. "Youth wise up now, king!"

The community is part of the West Kingston constituency of Prime Minister Bruce Golding, but residents say they have been largely ignored because of their loyalty to the PNP.

One week before he was elected member of parliament for West Kingston in January 2005, Golding vowed to end political victimisation in the constituency and to improve conditions in places where the JLP had little support.

For Hannah Town 'elders' like William Marshall, who operates a small craft shop close to the Kingston Public Hospital, that was nothing but a hollow promise.

"Dem build a police youth club, but dat minor 'cause no one earn from dat," said Marshall, who hails from Rose Lane.

In the 1970s, when political violence was at its peak, the thriving Hannah Town Bakery closed and many persons were left without work.

Then, in 1986, parliamentary boundary changes made Hannah Town part of West Kingston, which was represented by then Prime Minister Edward Seaga of the JLP.

Previously, it belonged to West Central Kingston, which was controlled by PNP Member of Parliament Ralph Brown.

Older persons in Hannah Town still speak highly of Brown, a local-government stalwart who died in 1999.

William Marshall believes that until a representative with similar interest in the people's welfare comes to the fore, Hannah Town will continue to suffer.

'Mi go to him and seh, 'Yow, Dudus, the war t'ing nah go work', an' him seh peace is the answer, but how much a wi have love inna wi heart,' Simmonds recalled. 'A him really strengthen di t'ing.'