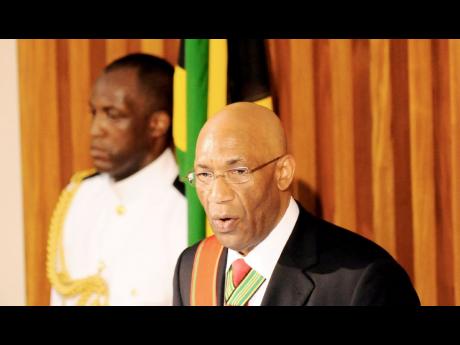 Governor General Patrick Allen yesterday declared that Jamaica has passed the worst of its challenges, as he delivered the 2010-11 Throne Speech in a sleepy ceremonial opening of Parliament.

"We have ridden the waves and although the sea billows rolled and buffeted our ship, we have weathered the storm," Sir Patrick declared to the rapping of desks, which were few and far between throughout his 35-minute presentation.

The Throne Speech, titled 'Fixing our problems ... positioning for growth', outlined the Govern-ment's plans and programmes for the 2010-11 legislative year.

In a rallying summon, clearly aimed at inspiring renewed hope, Sir Patrick continued: "We have not yet found calm waters but the worst has passed, we must now mend our sails, set our compass and conquer the high seas."

The hopeful note on which the Governor General ended was in stark contrast to the almost apologetic tone in which he started, as he reflected on the last legislative year.

"Despite exerting tight restraint on expenditure, it became necessary to increase taxes," Sir Patrick commented to subdued members of the Senate and House of Representatives.

Sir Patrick characterised the 2009-10 legislative period as a year in which a global crisis continued to bear down heavily on the economy.

He told silent parliamentarians that as the economy contracted, revenue fell below what was required to meet essential Government expenditure.

The languid atmosphere in the parliamentary chamber, reflected the unusual scene on Duke Street - devoid of the customary colourful crowd of supporters, attempting to outdo each other for the ceremonial opening of Parliament which marks the start of the legislative year.

The pronouncement by the Governor General which generated a single bout of spontaneous applause was the acknowledge-ment of sprint star Usain Bolt and other athletes' accomplishments at the World Championship in Berlin, last summer.

Sir Patrick served notice that Parliament should be busy in the coming days.

He reiterated the Government's promise that action would be taken on the five anti-crime bills which have been languishing in the Parliament due to a lack of consensual support.

He promised that the proposed anti-gang legislation would be enacted, signalling Government's determination to take the fight to criminals.

Sir Patrick expressed regret that the Charter of Rights Bill was not passed in the last legislative year and asserted that it would receive Parliament's stamp of approval once and for all, early in the 2010-11 legislative year.

"We owe it to our people to deliver on that promise this year," he told parliamentarians of the Charter of Rights Bill which Governments have been trying to get passed since 1992.

He promised that the Government would move to implement the recommendations contained in the report on the Commission of Enquiry into the May 22, 2009 fire at the Armadale Juvenile Correctional Centre.

Sir Allen emphasised that far-reaching changes would ensure, among other things, that the practice of holding children in lock-ups cease.

"This year, the Government will be introducing a programme supported by the necessary legislation to enhance child justice, strengthening the responsibilities of both the State and parents in the care and welfare of our children," he said.

The Governor General also lauded the positive performance of agriculture and tourism in the face of the global economic crisis and commended Jamaicans for "responding magnificently" to the Jamaica Debt Exchange initiative.