Chelsea hopes 'bad period' is over 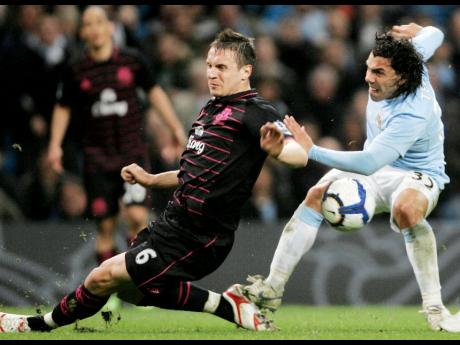 Preparing for Chelsea's final charge toward the English Premier League title, manager Carlo Ancelotti hopes his team's confidence has been restored by a 5-0 demolition of Portsmouth.

While it was only against the bottom-place team, Chelsea's emphatic performance on Wednesday helped to banish memories of a draw at Blackburn in the Premier League and the Champions League elimination at the hands of Inter Milan last week.

"I hope that bad period for us is finished," Ancelotti said. "We'd lost some confidence in our play in the last few weeks, but we played well (at Portsmouth). This performance will improve our confidence ... we need to maintain this period and this spirit to play."

With seven matches to go - starting tomorrow against Aston Villa - Chelsea are just a point behind defending champions Manchester United.

"People have given us a lot of criticism recently," Chelsea striker Didier Drogba said. "But I think they're fair because we haven't played at our level in the last few weeks."

Villa, which beat Chelsea 2-1 at home this season, are chasing a Champions League spot. Despite drawing seven of their last 10 matches, Martin O'Neill's side is just four points behind fourth-place Tottenham.

O'Neill's main concern is a trio of injuries, with Emile Heskey, Richard Dunne and James Milner all facing scans to determine the extent of their respective Achilles problems, while leading scorer Gabriel Agbonlahor is sidelined with a foot injury.

Chelsea play ahead of Man United today and the champions could be without Wayne Rooney at Bolton. After netting his 33rd goal of the season in last Sunday's win over Liverpool, Rooney limped out of Old Trafford as he continues to struggle with knee problems.

Bolton manager Owen Coyle hopes Rooney is rested ahead of United's trip to Bayern Munich on Tuesday in the Champions League quarter-finals.

"Any manager would be glad of the chance not to face him, if indeed that proves to be the case," Coyle said. "Along with Cristiano Ronaldo and Lionel Messi, he's one of the top three players in the whole world at the moment."

Neither United nor Chelsea is discounting the threat posed by Arsenal, who are just two points off the top and play at Birmingham tomorrow.

"We have three teams in the race and it will be down to the team which is the most consistent," Arsenal manager Arsene Wenger said. "We have created a fantastic momentum and a great belief within our squad, but the consistency of our run is the most important."

Directly below Arsenal, north London rivals Tottenham strengthened their grip on the fourth Champions League spot without even playing on Wednesday.

Liverpool, who are at Sunderland on Sunday, and Villa, are two points further adrift in sixth and seventh, respectively.

"We have a tough run-in but we have players of good quality," Spurs forward Eidur Gudjohnsen said. "It's a good squad and we're showing that in the league and cup."

City manager Roberto Mancini is not giving up on Champions League qualification, which could be key to securing the Italian's future.

"There are still enough games to go and we must start again on Monday against Wigan," Mancini said after Everton inflicted City's first home loss of the season.

"We have a good spirit and we are a good team. If we believe in ourselves we can get the fourth position."