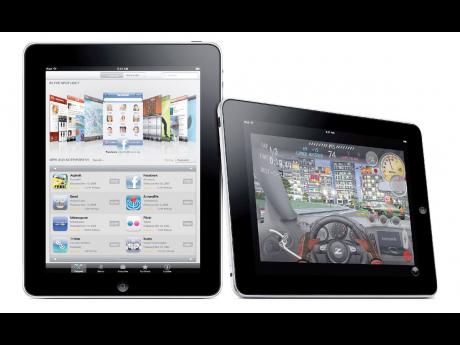 In this product image released by Apple Inc, the Apple iPad is shown. - AP Photo

People who lined up to buy the first iPhone knew what they were paying hundreds of dollars for a new cellphone that promised to be better. Apple Inc's newest gadget, the iPad tablet computer, falls into a category that's foreign to most people.

And yet it is clear that plenty of people have already happily dropped US$500 or more for a device they have never seen in the hopes it will be some previously unidentified missing link in their digital lifestyles.

"If Apple sold groceries, I would buy groceries from them," says Matthew Rice, who works for pharmaceutical company Merck & Co.

Apple won't say how many iPads it has sold in advance of their debut yesterday, and it was hard to predict how many enthusiasts would have camped overnight and swamp Apple stores when the doors opened yesterday at 9 a.m., as they did for last summer's launch of the most recent version of the iPhone.

That happened even though people could 'pre-order' the device, just as they can for the iPad.

Rice would not have ripped open any boxes yesterday, but only because he chose to wait a few extra weeks for an US$829 iPad with a '3G' data connection, which won't ship until late April.

He has owned four iPhones and just about every model of iPod ever produced. He uses an iMac computer at home and a MacBook Air laptop on the road.

He jokes about giving Apple his credit card number and having the company just ship new products as they are released. And despite his near-complete catalogue of Apple goods, Rice can still find holes for the iPad to fill.

It will be perfect for carting around PDF versions of scientific articles he needs to read for his job, he says. And Rice, an avid photographer, hopes it will be a way to hand people an "album" and let them flip through photos of his travels.

A change of mind

Will Zich, an 11-year-old, started saving money late last year for a new iPod Touch, but changed his mind when the iPad was unveiled in January. He can rattle off all his reasons for wanting one, such as the e-book store, plus a bigger screen and faster processor than his iPod Touch. He says the iPad will be useful on road trips, and for playing games and surfing the Web early in the morning when the rest of the family is still sleeping.

To be practical, Zich says he might also bring it to school and use it to record homework assignments.

Other people don't expect to ever leave home with it.

Brian Herlihy, a 31-year-old financial analyst in New York, expects the iPad will offer him a way to read magazines, newspapers and maybe books without the clutter of paper, and as a Web surfing device that is faster to start up than his laptop. On the street or when riding the subway, though, his smaller iPhone is a more appropriate size.

Media companies are betting that the iPad's larger size - its touch screen is 9.7 inches (24.6 centimetres) diagonally, compared to 3.5 inches (8.9 centimetres) on the iPhone - is one reason people might pay for news and information that is often free in other formats online. Indeed, Herlihy says he would be willing to pay a moderate amount of money for a newspaper or magazine if it were delivered through some sort of outstanding application. Otherwise, he is content to read for free using the Web browser.

On Wednesday, the Silicon Valley venture capital firm Kleiner Perkins Caufield & Byers said it is so excited about the iPad's potential that it is adding US$100 million to its fund for investing in developers who make applications for Apple devices. The firm began its "iFund" two years ago with US$100 million and has invested in 14 companies.

Such optimism could be warranted given that it's not just diehard Apple buyers who have been swept up in the hype. The iPad has also turned the heads of folks who have been lukewarm on Apple gadgets.

Nick Braccia, a creative director at a digital advertising agency in San Francisco, uses a BlackBerry phone and music player that connects to the Rhapsody subscription service.

"If anything, I was always kind of 'anti',"' Braccia says. "I get a little annoyed with people standing outside for an operating system update. I have no patience for rabid fan-boy-ness."

Braccia, 34, says he thought the iPad would be too expensive for him to even consider. When he learned that the starting price was US$499, he was sold.

It didn't hurt that the iPad will come with electronic book-reading software, and can be used to replace the Nook e-book reader from Barnes & Noble Inc his girlfriend monopolises.

Braccia thinks he will use his iPad for surfing the Web over morning coffee, for reading books and maybe watching movies. And he justifies it as a smart purchase for work because his clients make video games.