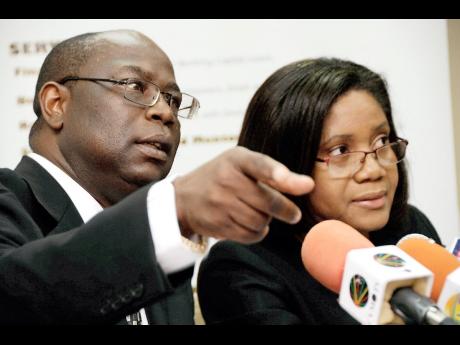 Vitus Evans, president of the Jamaica Exporters' Association, gestures as he speaks at the association's press briefing on March 23. Beside him is JEA General Manager Jean Smith. - Rudolph Brown/Photographer

In the article entitled 'Tufton rejects exporters' claim of restrictions as disingenuous', published on Wednesday, March 31, 2010, Minister of Agriculture Dr Christopher Tufton described the Jamaica Exporters' Association (JEA) as being "disingenuous" in its claim that the ministry's policy with regard to providing waivers for critical raw materials was hurting the agro-processing export sector. The article reported further that the minster had indicated that he wanted more specifics regarding this claim, that after a meeting in December with the processors, cassava was identified to "fill the demand", and that the JEA needed to adjust its "mindset" away from a dependence on imports.

We wish to provide the following information, which we hope will serve to set the record straight, in response.

The JEA and Jamaica Agro Processors Association (JAPA) have stated publicly that they are in full support of the Ministry of Agriculture's efforts towards expanding domestic supplies of food and raw-material inputs for processing, both for the domestic sector and for export, but we emphasise the need for processors and exporters to be able to procure critical inputs at all times in order to protect Jamaica's markets overseas.

We assert that it is the duty of the Ministry of Agriculture (MOA) to facilitate this process.

In April 2009, a processor advised the JAPA that it had approached the MOA about problems processors were having in getting permits to import raw materials when they were not available on the local market.

Processors had serious problems the year before, 2008, with shortages of red pepper locally, and some had lost markets because they were unable to get permits in a timely manner to be able to produce to meet orders overseas.

It took over six months in some cases.

They were not given the required permits, and attempts made by the JAPA to have a meeting to discuss the matter were unsuccessful.

In a meeting held six months later in October 2009, at which the minister was present, while refusing to acknowledge that there had been a problem with red peppers the previous year, the ministry admitted that cassava supplies were inadequate and would not be adequate before early this year, January-February 2010.

The MOA still refused to consider allowing importation in the intervening period, causing the loss of the critical Thanksgiving and Christmas sale periods for exporters in markets overseas.

This meeting was in October 2009, not December, as indicated in your article.

The MOA's refusal to issue permits to allow processors to import cassava last year resulted in processors, including Tijule Company Limited and Central Food Packers, two of the largest producers and exporters of bammies, having to curtail production.

These firms together employ over 350 persons, who affect the lives of a further 1,400 persons.

Because of the inability to get adequate supplies of cassava and the ministry's refusal to allow imports, bammy exports declined by US$105,000 (J$9.45 million) last year.

We lost markets in the United Kingdom directly because of this and have correspondence from customers to exporters which attests to this.

The processors raising these raw material supply and production issues have each been in the business for over 25 years, some as many as over 40 years.

They include the major producers and exporters of sauces from the parishes of Trelawny, St Ann, Manchester, Westmoreland, St Catherine and Clarendon.

Collectively, they employ more than 1,000 persons, affecting the livelihood of more than 5,000 directly, excluding the farmers from whom they buy. In addition, they have long and well-established relationships with many farmers across the island, and have been a major market for these farmers for years, since most of what they grow is exported.

Only through established relationships, such as those that already exist, and exports, can agricultural production in crops like pepper, cassava, yams and others be sustainably expanded, as we in Jamaica do not consume enough of these products to allow farmers to plant more.

Despite this fact, there is a fallacy that is often repeated which alludes to a mindset that processors prefer to import raw materials rather than buy locally because they do not want to pay farmers reasonable prices.

The facts are that imported pepper mash from Costa Rica in 2009, for example, cost more at US$0.57/pound than local peppers, which cost on average US$0.45/pound; but these were not available during the early part of 2009 when the imports were brought in.

This data is sourced from Statin, extracted by the JEA.

Further, even with these imports in 2009, the five largest local processors collectively still bought in excess of J$104 million in peppers and scallion from farmers.

The argument that imports are cheaper and that processors prefer to import raw materials is a myth that is not supported by these and other data.

The truth is that imported raw materials more often than not cost more and/or are of inferior quality to locally supplied produce, and so processors invariably prefer to buy locally, if it is available.

Price only becomes an issue when supplies are not available and prices move beyond reasonable levels. For example, scallion can move from a low of J$30/pound to over J$150/pound.

As such, even when local raw materials are not available, Jamaica benefits significantly from every unit of these products manufactured and exported, and this excludes the jobs provided by the processors in making them.

The problem with permits extends beyond peppers, scallion and cassava and, if not addressed, could cause irreparable damage to areas of the agribusiness export sector.

Pickapeppa, a major processor, has had ongoing challenges with getting permits to import dried, ground ginger, a key ingredient of its world-famous brand which cannot be substituted by local ginger unless it is available in this form.

The facilities do not currently exist locally to dry and grind ginger to the specifications that they need. They have also complained to the JEA that they have been having problems up to the present in getting the permits they need to continue to import this minor in terms of quantity, but critical in terms of the product and the brand ingredient.

A major flavour and ingredient supplier to most of the drink and juice manufacturers locally - another growing areas of our exports - has reported to the JEA that it is currently being denied permits by the MOA to import egg yolk powder. They are being told that they have to use liquid eggs, even though this liquid format is not suitable for the dry egg-nog flavour that they supply, and cannot be used in a dried powdered-beverage application.

SILENT FOR TOO LONG

The exporters have remained silent for far too long and have tried to work with the MOA, but it appears that they are not willing to listen and, up until now, are bent on sticking to a policy that will cripple exports in one of the few sectors that weathered the recession, and in which we have seen growth.

There
is need for a shift in policy to one that supports local agricultural
production but is sensitive to the need to keep our export markets
supplied with products, regardless of the domestic situation as our
competitors who do not have to deal with our local realities.

he
leadership of the MOA, if it is serious about market-led agricultural
development, must listen to and work with the persons who sell what
they are seeking to have farmers produce and who, along with the
farmers, in the final analysis, have to be part of a seamless value
chain if Jamaica is to see the benefits of sustained expansion in
agriculture that can help us earn our way out of our current problems
through exports.

The
JEA, an organisation that has for the last 44 years dedicated itself to
expanding Jamaica's non-traditional exports with some success as
evidenced by the doubling of Jamaica's non-traditional exports to over
US$2 billion over a six-year period to 2007, absolutely rejects the
claims of Minister Tufton as presented in the above-mentioned article.

This
organisation that has worked with producers, including farmers, and
exporters in all areas, as well as the government, to accomplish this
over the years, is only seeking to have the ministry play its role as a
facilitator of agribusiness-based export growth to the benefit of the
farmers and processors, their stakeholders and Jamaica as a whole.

We seek nothing more.

The JEA is prepared to provide more details in support of our assertions, should these be required.