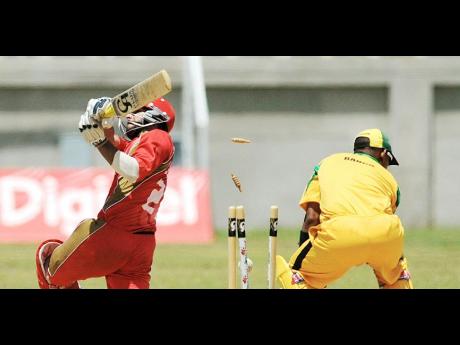 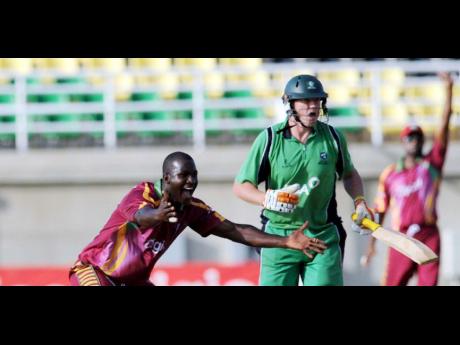 The West Indies (143-8), despite a below-par batting effort, completed a comfortable 31-run victory over Ireland (112-7), after recovering from a few nervous periods in their Supreme Ventures Sports Betting Jamaica Cricket Festival match at the Trelawny Multi-purpose Stadium yesterday.

Meanwhile, Jamaica, which scored 175 for four, easily bettered Canada (112 for eight) by 63 runs, to end their participation in the festival on a high note.

In the feature match, the Irish team flattered to deceive after a disciplined showing in the field through the first half of their performance. However, they were undone by the Caribbean team's 80-run display in the last six overs.

The West Indies found themselves up against a spirited Ireland outfit - who they will play at the group stage in the April 30-May 16 ICC World Twenty20 Cham-pionships - and were struggling early with two wickets down and only seven runs on the board, as openers Andre Fletcher (6) and Shivnarine Chanderpaul (1) were sent back to the pavilion.

Fletcher, who was dropped in the opening over on two by Alex Cusack, could not beat the tall fielder a second time, as the Irish player went low to clutch a powerfully hit drive at extra cover, to rattle West Indian nerves.

Wavell Hinds chipped in with a decent 21, but Shivnarine Chanderpaul (1) and Ramnaresh Sarwan (2) continued to find runs hard to come by on the tour so far.

However, it was Narsingh Deonarine who was the pick of the Windies batsmen as the diminutive Guyanese continued his purple patch, assaulting the boundary ropes on several occasions with a delightful 40 off 32 balls.

Deonarine, who struck 40 runs from 43 balls against Canada on Saturday before taking 4-14 with the ball in his hand, struck three sixes and a four to push the regional team to their challenging total after going to the crease with the team struggling at 10 for three wickets.

Despite Ireland's best efforts, the West Indies middle order managed to rally the team and with the score on 128-8, captain Darren Sammy (26 not out) and Ravi Rampaul (8 not out) added another 15 runs off the last over.

When Ireland batted, the West Indies struck early, Ravi Rampaul getting rid of captain William Porterfield for nought with the third ball of the innings.

The lanky Sulieman Benn got a wicket from the other end in the very next over, bowling Niall O'brien around his leg for just three runs.

Benn got Ireland's third wicket when wicketkeeper Fletcher stumped Gary Wilson for three in his second over.

Paul Stirling (25), who provided the only bit of resistance for the Irish and Andrew White (16) partnered for 37 runs before Stirling's fight came to an end at the hands of David Bernard Jr, after he was caught by Bravo. Sammy took over in the seventh over when he removed White and Kevin O'Brien (lbw for 2) to leave the visitors reeling on 63-6.

In the end it turned out to be a comfortable victory for the West Indies, who will now focus on tomorrow's one-day international against Canada at Sabina Park.

Meanwhile Jamaica made light work while rebounding against Canada in the earlier game.

The Jamaicans had lost Saturday's match against Ireland by seven runs.

Danza Hyatt top scored for the Jamaicans with 48 runs off 33 balls, including seven fours and two sixes, while Donovan Pagon ended not out on 33 (25 balls) and Wolmer's schoolboy John Ross Campbell (28 runs), to lead the Jamaicans to a decent 175-4, before bundling out the North Americans for 112-8 in their 20 overs.

Krishmar Santokie was in top form, capturing three wickets for seven from three overs, while Bevon Brown (2-20) and Tamar Lambert (2-24) were also responsible for Canada's demise.