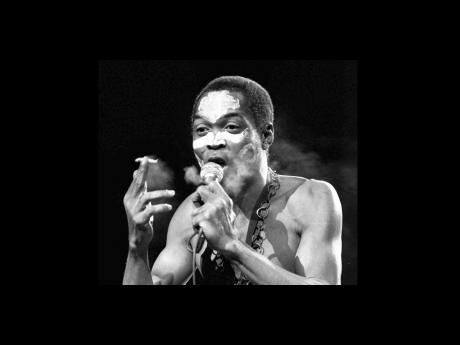 In this September 13, 1986 file photo, Fela Anikulapo Kuti is seen during a concert in Paris. Fela, the late Nigerian musician and political agitator, fascinated millions and had fans around the world, including legends like Paul McCartney and Stevie Wonder. Yet he was, and still is, largely unknown to popular audiences, especially in the United States. - FILE 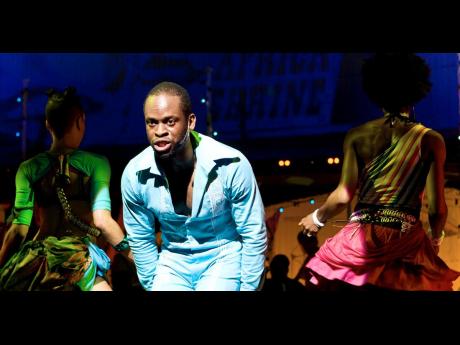 Fela, the late Nigerian musician and political agitator, fascinated millions and had fans around the world, including legends like Paul McCartney and Stevie Wonder. Yet he was, and still is, largely unknown to popular audiences, especially in the United States.

That is slowly changing. More people are starting to know the name, music and struggle of Fela Anikulapo-Kuti. His story is reaching thousands through the Broadway musical Fela! In addition, his albums are being rereleased and a film about his life is planned.

But during his life, Fela wasn't interested in becoming a global star. His songs would last 10, 20 or 30 minutes long - not suitable for regular radio play. He also toured with a band that had 70-plus members. And Fela didn't want to compromise to fit the mould of the pop sensation.

"He used to say, 'I don't care what you do but don't (expletive) around with my music man,'" said Rikki Stein, Fela's last manager before the singer-composer died of AIDS in 1997 at age 58.

"(Fela would say), 'I'm writing African, classical music, and you don't (expletive) around with Tchaikovsky so why you going to mess with me?' And that's something that reverberated through me over the years," continued Stein.

Fela, who was born Olufela Olusegun Oludotun Ransome-Kuti, was known as the founder of Afrobeat music. He created that genre in the 1960s by combining African sounds with a fusion of rock, R 'n' B, jazz and soul music. He performed at his nightclub in Lagos, The Shrine, and also around the globe.

Voice of the oppressed

But Fela, whose father was a Protestant minister and mother an activist, did not just want to be a musician - he also wanted to be the voice of the oppressed. In 1979, he formed the political party Movement of the People and over the years, he repeatedly staged unsuccessful runs for president.

His songs and lyrics battled what he saw as corruption and oppression by the Nigerian government at the time. He paid a price for his activism, though. He was beaten and jailed more than 200 times, while soldiers threw his mother out of a window; she died from the injuries.

"He's as important as James Brown or Bob Marley and it was a story that had to be told," continued Veal, who is also professor of music at Yale University.

Veal says that Fela is "as popular as he needs to be."

"People want to try to force these artistes into the model of the Western pop star, and that's not (Fela's) model. His career basically unfolded the way he wanted to. He never wanted to cut his songs down to be popular on the radio, he wanted to present his music the way he presented it ... and it stood the test of time, and people are appreciating his music on his own terms."

Fela's dramatic life was recently introduced to a large audience in the United States when the musical about him opened off-Broadway in September 2008. A year later, it arrived on Broadway to mostly positive reviews.

"There's been more publicity, more attention, more recognition of him in the last four months than there has been in the previous number of years," said Stephen Hendel, a lead producer and co-conceiver of the play.

Jay-Z and Will and Jada Pinkett Smith signed on as producers-investors when the play joined Broadway. Guestlove of the Roots has been actively promoting it on his blog, and big names like Madonna, Denzel Washington, Sting and Robert De Niro have gone to see it. The play is also set to run in London later this year.

Knitting Factory Records released The Best of the Black President in November. The first batch of his album catalogue arrived in February; the second batch will be out May 11.

Many top artistes like Nas, Missy Elliott, Fatboy Slim, Common, Mos Def and the Roots have sampled Fela's music for their songs. Ian Wheeler, the label manager for Knitting Factory, hopes their fans will catch on and recognise Fela's influence.

"It's the sort of thing where kids, younger kids, younger audiences especially, are hearing the kind of intricate hooks and I'm hoping one day the dots will come and connect and they'll realise, 'Hey, that's Fela,'" he said.

A film on Fela, who had more than two dozen wives and numerous children, is in the works with Focus Features. It is being adapted from Veal's book. Film producer Lydia Dean Pilcher said production is expected to begin in the fall with a hopeful release in 2011.

This year PBS featured Fela in a segment of the new programme Music Without Borders, also highlighting his youngest son, Seun, who released his debut album in 2008. Fela's oldest son, Femi, is also a performing musician.

Fela's brother, Beko, an activist and doctor, was recently honoured in Lagos with a statue. According to the Nigerian newspaper The Vanguard, Lagos State Governor Raji Fashola described the Kuti family as the Kennedy family of Nigeria, commending the family for providing the country with great heroes.

"When he died I remember sitting on his first wife Remi's bed in Lagos and reading these letters from the top, top people, the top in the administration and they weren't just letters of condolences, they were testimonies to a great man," Stein said.

"At the time, I said, '... All his life you gave him nothing but grief and now he's gone and you're calling him a great man.' But anyway I think the time is coming now where they're starting to recognise the need to pay tribute."