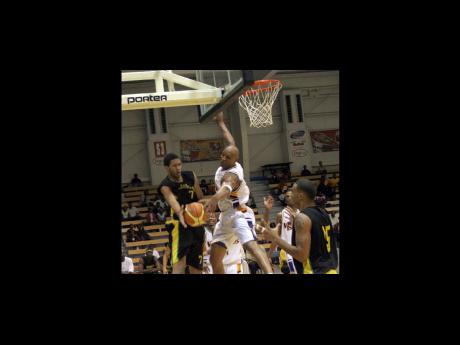 File photo shows Jamaica's Jerome Jordan (left) being challenged for the ball by the US Virgin Islands' Jaja Richards (centre), during Caribbean Basketball Championship action at the National Indoor Sports Centre in 2006. Jordan has been entered into the NBA draft.

Jamaica's centre Jerome Jordan has been entered into this year's National Basketball Association (NBA) draft, which will be held at Madison Square Gardens in New York City on Thursday, June 24.

The 7-foot Jordan, who averages 15 points, nine rebounds and 2.5 blocks per game, is projected to be a late first-round to early second-round pick by popular sports network ESPN.

According to information gleaned from ESPN's website Jordan, who is currently working out in California under the watchful eyes of his agent, Bill Duffy, led Tulsa University to the semi-final of Conference USA, where they were defeated by the University of Texas, El Paso.

Jordan started all 35 games for Tulsa this season and was named Second-Team All-C-USA. He also earned NABC and Sports News first-team All-Conference USA honours and became the only player in C-USA history to grab at least 800 rebounds and block 300 shots. He also set the school record for blocked shots with 333.

Jordan, a past student of Jamaica College, is currently completing his degree in Sports Science.

When contacted yesterday, Jerome's father, Bryan Jordan, told The Gleaner his son is looking forward to this year's draft.

"I feel good because I'm expecting him to be drafted in the mid-first round and I think that he has the ability, as he is one of the best centres in this year's draft," he said.

Bryan added: "He has been handling things really good because he doesn't feel pressure and this is because of his personality. He is very relaxed and calm and growing up he has shown that he can handle pressure," said Bryan.

Meawnhile, Ajani Williams, president of the Jamaica Basketball Association, said he expects Jordan to be a first-round pick.

"Right now, certain people project him in the second round. However, those teams that get to see him work-out before the draft will realise he is definitely a first-round talent," said Williams.

He added: "Jerome has always been a top-20 pick. If he had come out last year he would have definitely been a top-15 pick in the draft. However, circumstances based on how he was showcased by his coach changed his value in that he wasn't as dominant as he was last year."

Williams noted: "I believe that at seven feet and highly skilled he would be a first-round pick in the draft. However, I am proud that he was able to finish school and get a good education."

There could be two Jamaicans in this year's draft, as Samardo Samuels has declared his intentions to enter. However, he is yet to sign with an agent.