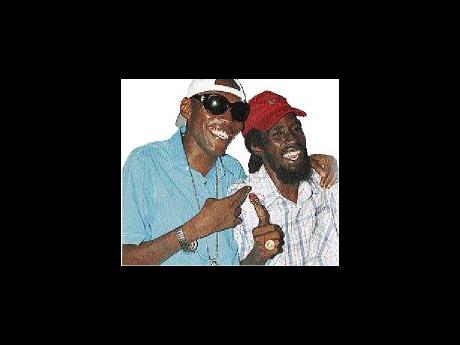 Vybz Kartel (left) and Mikey Pelpa are all smiles at the Peace march held in Waterford, Portmore, St Catherine. - File

The Jamaica Forum for Lesbians, All-sexuals and Gays (J-FLAG) has acknowledged that Vybz Kartel's signature affixed to the Reggae Compassionate Act is a step in the right direction of the dancehall artiste claiming responsibility for his music.

However, Dane Lewis, executive director of J-FLAG, said the next step is to hold artistes accountable for their lyrics.

"Considering what the act calls for, this is a step, as long as the signature is not just a token.

"Signing the act is one thing, but it's important to stand up for it."

The Reggae Compassionate Act was drafted in 2007 as part of the Stop Murder Music campaign, a human-rights groups coalition, which advocates for lesbians, gays, bisexuals and trans-identified persons.

The act speaks to positive social changes and upholding the rights of all individuals regardless of ethnicity, sexual orientation, religion or gender.

Kartel would not confirm the details but questioned why there was a brouhaha over his signing the document.

"Yes, I did. What's the big deal? So what if I did?" he asked before hanging up the phone.

Lewis said the 'big deal' is to make sure performers adhere to the act's strictures.

"Artistes should be aware of the influence their music could have on society," Lewis said.

According to the J-FLAG executive director, there were approximately 400 cases reported since January involving hate crimes against persons who identify with the lesbian, gay, bisexual and transgender (LGBT) community.

"They range from raping lesbians to physical assault," Lewis noted.

He also recounted an incident when a person was killed in a dance hall as Buju Banton's controversial anti-gay anthem, Boom Bye Bye, was played.

Jamaican dancehall artistes such as Buju Banton, Beenie Man, Sizzla and Capleton have been chastised for several years by LGBT groups in North America and Europe for their anti-gay lyrics.