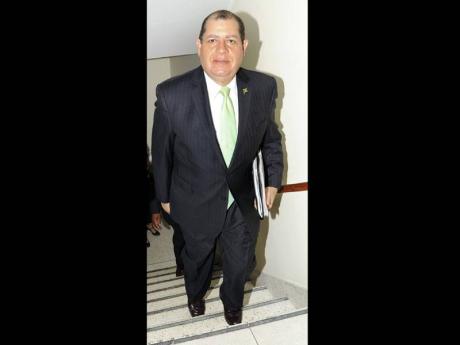 Finance Minister Audley Shaw is seen here arriving at Gordon House on May 11, the day he tabled the Green Paper on tax reform. - File

Regional think tank, the Caribbean Policy Research Institute (CaPRI), has given a favourable rating to the broad tax reform plan tabled in a Green Paper by finance minister Audley Shaw, but says the roadmap as laid out is unlikely to make the system more efficient.

It falls short, the think tank said, on incentives for taxpayers who have faithfully met their obligations to the treasury.

On the first two, CaPRI gave Shaw a B-.

"The Green Paper shows that the first two are priority for the Government but we are not satisfied because some straightforward things have been left out," Kiddoe told The Financial Gleaner on Wednesday, after CaPRI presented its analysis of the reform plan at a forum at the University of the West Indies.

Pointing to Jamaica's unflattering record as one of the lowest tax-compliant countries in the world, Kiddoe said CaPRI believes more should be done to reward persons and businesses who consistently pay taxes.

Such incentives are common in other countries, she said.

Other tax recommendations by CaPRI include: extending the period of validity for the Tax Compliance Certificate to persons with a history of compliance; the design of a unified tax return which would facilitate monthly filing and payment of general consumption tax (GCT), payroll and withholding tax; permit companies to form GCT groups to file single consolidated GCT returns; and permit bi-monthly filings for small taxpayers.

Shaw tabled the Green Paper in the House of Representatives on May 11. It is the latest attempt by a Jamaican Government to widen the tax net while also revamping an archaic tax system which economists point to as a deterrent to sustained growth.

The Green Paper proposes a raft of amendments that includes lowering the GCT rate from 17.5 per cent to 12.5 per cent as of January 2012.

It recommends that the personal income tax threshold be moved from a minimum $441,168 per annum to $507,312, which would also take effect in January, and for corporate taxes to be cut from 33.33 per cent to 30 per cent.

Since his appointment as finance minister four years ago, Shaw has aggressively gone after tax dodgers.

This year, he has implemented a hotline for persons to report suspected tax dodgers and has warned professional groups that they would come under greater scrutiny.

Entertainers, business persons, and politicians are among the delinquents whose assets have been seized in the last three years.

CLARIFICATION: This article has been updated at the third paragraph to clarify that the three elements outlined by CaPRI Research Officer Anika Kiddoe were in reference to her own presentation at the forum and not the green paper.