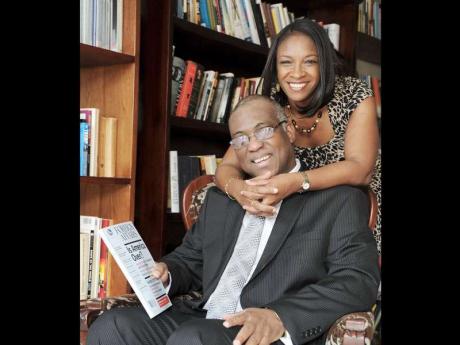 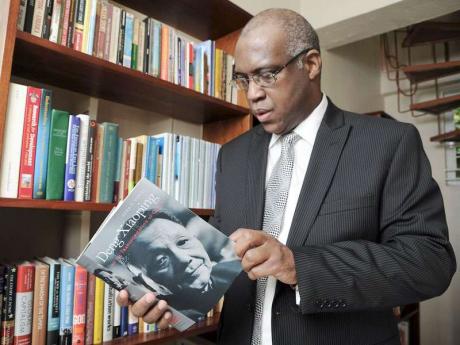 Ian Boyne is a voracious reader with more than 2,000 books in his collection. He devotes most of Sundays into early Monday mornings and Tuesday nights to his passion. - Ricardo Makyn/Staff Photographer
1
2

It is among the longest running programmes on local television. It is 'Profile' and it is hosted by veteran journalist Ian Boyne, who will celebrate the 25th anniversary of the show on Wednesday, February 22 and, it's not surprising that Boyne wants the world to know it.

He cites many other shows of its genre that have fallen by the wayside; these include 'The Diana Wright Show', 'Tuesday Forum', 'Thwaites and Company', 'Perspectives' and more.

As he sat with Outlook to reminisce on his tremendous success, Boyne noted the difficulty to maintain personality-driven programmes. Using some of the top international television programmes as his benchmark, he notes unapologetically that "'Oprah' retired after 25 years, 'Phil Donnahue' after 26 and 'Larry King Live' ended after 25 years but 'Profile' still commands the highest viewership in that time slot on Sundays. "We have maintained that position since inception (it started when we had only one TV station!)", Boyne adds with obvious relish.

Not modest about his accomplishments, Boyne is also quick to admit to learning from some of the best in the business like Mike Wallace, Diane Sawyer, Tim Russert and Peter Jennings. And he compares the success and longevity of 'Profile' only with similar series on the international scene. Additionally he emphasises that the programme seeks to promote success stories of persons who have risen above extreme adversity and emerged victorious when the odds were against them.

"That is what I set out to do at the start," he said when asked where the idea for the show came from. He said after reading The 7 Laws of Success by Herbert Armstrong, it left a big influence on his early life and he thought why not use journalism to reach a wide audience and thereby show everyone how to overcome difficulties? Among those who facilitated his dream very early in the process were Opposition Spokesperson on Youth, Sports and Culture, Olivia 'Babsy' Grange, who introduced him to Gloria Lanaman who then sent him to the late Don Bucknor at the then Jamaica Broadcasting Corporation (JBC).

Things moved fast and then Programmes Manager Lois Gayle gave him an initial three-month tryout. His first  guest was the late Carlton Alexander, and the rest, they say is history! He was paid a paltry $400 per episode; some early sponsors included Shirlhome Chemicals and LASCO, and at one point the show nearly went off air but the National Commercial Bank came to the rescue and today he is even streaming live on the Internet.

"We have an 'excellence code' that demonstrates our belief in that we can learn lessons from the lives of persons we interview," Boyne said. He further stressed that part of his success as the host is that he has survived on his wealth of knowledge garnered from his extensive reading and research and he has learnt from his guests how to maintain success.

"If you don't know what you are talking about, the guest will pick that up and you won't get their best; so I have to be able to match wits with minds from all fields while being able to deal with all types of personalities, even difficult ones," he said. The viewers love a success story so he is always being introduced to remarkable people, he revealed when asked how he finds the interesting guests for the show. But, he is quick to add that to date no one has emerged to put up a serious challenge to 'Profile'.

Outlook asked Boyne a series of questions geared at capturing the essence of 'Profile' through the 25 years.

Who would you most like to interview: Karl Hendrickson because he doesn't want to be interviewed and Diana Ross.

Who has he waited the longest time to interview: Glen Christian of Cari-Med, very highly accomplished but was reluctant to talk about himself.

Most memorable guests: There have been too many to mention.

Most eye-opening/surprising guest: National Commercial Bank's Group Managing Director Patrick Hylton's story was interesting, I did not know he was such an extraordinary human being.

There has been at least one guest whose story seemed rather incredulous.

Except for prime ministers he avoids politicians as a group because of their tribal tendency. He also finds that artistes are brilliant at expressing themselves through their craft but many tend to be difficult to communicate with and you have to be careful with them.

"Many artistes may have a message that conflict with society's as a whole, or values that clash with viewers'. 'Profile' is synonymous with a certain kind of person and set of values, the type who wants to be inspired by people who rise up from adversity against all odds, so I have to maintain that," Boyne stressed.

What about teens and young people: Yes, I have interviewed teens from extraordinarily poor or depressed backgrounds who have excelled at their subjects at sixth form or in university."

And, contrary to popular opinion, Boyne prefers the print media to electronic.

Not one to speak much about his private life, Boyne, a multi-award-winning journalist, is married to Margaret, an accountant. He disclosed that they arrived at a compromise about the long hours he devotes to reading every week. The two spend the entire day every Saturday together. Being a pastor of his church, they fellowship together and Saturday nights are date night for the Boynes who love to dine out at one of their favourite restaurants in the city.

"My routine on Sundays is to start reading from eight in the mornings (newspapers, magazines, journals), followed by watching Howard Kurtz on 'Reliable Sources' and Fareed Zakaria's 'Global Public Square' (GPS). I have my breakfast by 2:30 p.m. and go back to reading till about 11:30 p.m. when I have dinner than continue to read till about 2:30 in the morning," he said.

A rather interesting routine, but he also reads on Tuesday nights after a hard day's work. But he also loves music and he parties or attends many concerts with his wife.