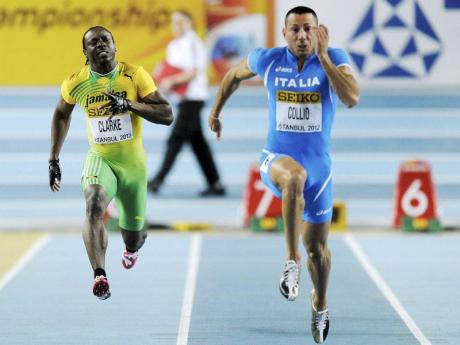 Lerone Clarke will bounce back from the massive disappointment of failing to get past the first round of the 60 metres at the World Indoor Championships (WIC) and earn a spot on Jamaica's team to this summer's Olympic Games, according to his coach.

Jamaican Victor 'Poppy' Thomas, who trains Clarke in the United States, claims that despite the national record holder's performance in Istanbul, Turkey, falling short of his pre-WIC status among the favourites to win, the sprinter is already shifting focus to the crucial outdoor season.

"We analyse and move on," said Thomas after speaking with Clarke on the athlete's return to Missouri. "It's better not to dwell on it."

Chief among the topics discussed was Clarke's poor start in the March 9 race, which led to a fourth-place finish in heat three and WIC elimination. Clarke's time of 7.05 seconds was well off his national record of 6.47 set just weeks prior to WIC.

However, Clarke was among several athletes who appeared adversely affected by the sound of the starter's pistol. Some athletes appeared to hear the gun before others in the same race. Some picked up more than one pistol sound, which would mean a false start.

Jamaica's Vonette Dixon stopped in her 60-metre hurdles heat believing there had been a false start.

The problem was partly blamed on the acoustics inside the Atakoy Athletics Arena.

Thomas said Clarke injured his hamstring in a desperate attempt to catch the field and was scheduled to visit a doctor last week. The coach also acknowledged damage to the athlete's emotions.

"His frame of mind was definitely hurt and disappointed," said Thomas.

For Clarke, formerly of William Knibb Memorial High School, Istanbul was another WIC opportunity lost. In 2010 he failed to advance from the first round of the 60 metres, finishing fourth. However, Thomas said there's no need for panic or harsh criticism of Clarke's 2012 performance.

"It wasn't that he was beaten," the coach explained. "If he ran and got beaten we would critique it. But it was just a mistake (at the start)."

Thomas said Clarke left for the WIC "in the best shape of his life", primed to shatter his personal record.

Justin Gatlin of the U.S. won the final in 6.46. Jamaica's Nesta Carter clocked 6.54 for second, with Britain's Dwain Chambers third in 6.60.

Clarke, who has been engaged in a hectic competitive schedule over the past two seasons, including gold in the 100 metres at the 2011 Pan American Games and 2010 Commonwealth Games, will now rest and heal from what Thomas is hoping is only a 'slight strain'. He is expected to return for the outdoor season next month, looking to transfer his form from indoors.

At stake is a spot on Jamaica's team to the Olympics in London, England, if not in the individual 100 metres, then as a member of Jamaica's pool of six runners for the 4x100 relay. Even with Jamaica's ultra-talented pool of sprinters, including Usain Bolt, Yohan Blake, Asafa Powell and Carter, Thomas believes Clarke will do well at the national trials in July and earn a ticket to London.