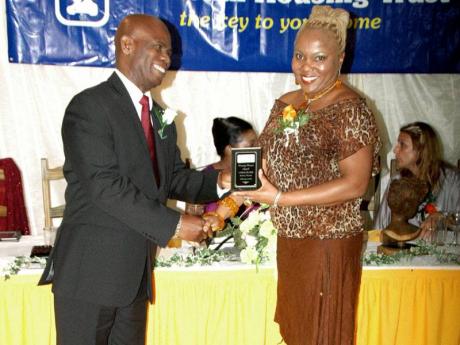 CAROL BLAKE was a picture of joy as she accepted her award from Custos of Kingston Steadman Fuller.

Blake, past president, Royale Place Estate Citizens' Association in Spanish Town, St Catherine, was one of 13 community stalwarts who were lauded as unsung heroes by the National Housing Trust (NHT) St Catherine Leadership Council, at a ceremony held at Arians Restaurant in Twickenham Park last Saturday.

"I feel very good, elated, excited, and I am happy that the NHT could have awarded us. For me, I am driven by serving," she told The Gleaner after she received her award.

It was the first time since the four-year-old council was launched that it was staging such a ceremony, as it seeks to foster growth and development as well as encourage persons to contribute to the viability and sustainability of their respective communities.

In the Governor General's Speech read by Fuller, Sir Patrick Allen said Jamaica was noted for persons who gave unselfishly to the development of the country.

"Jamaica's history is replete with many unsung heroes, persons who simply worked for the greater good of the country, often times at great personal sacrifice and without the benefit of public recognition," read Fuller.

He lauded the awardees for their invaluable contribution to the development of their communities.

"They have demonstrated two traits which I hold in high esteem and which, in my view, are critical to the development of our Jamaican society. These are, a spirit of volunteerism, and belief in themselves that they have the potential to be positive change-makers," he noted.

In addition to the unsung heroes, 23 community advocates were also recognised for their contribution to community development.

"What the council did was to ask for three nominees from each of the 23 NHT communities. We selected a committee to look at those profiles and look at what those nominees did, and selected the unsung hero from those three. We regarded the other two as nominees who have done exemplary work and awarded them with certificates," Vanessa Hamilton-Mendez, chairperson, planning committee, explained.

Over the last four years, the council, among other things, has hosted a launching and investiture function, three youth expositions, and a 5K road race.