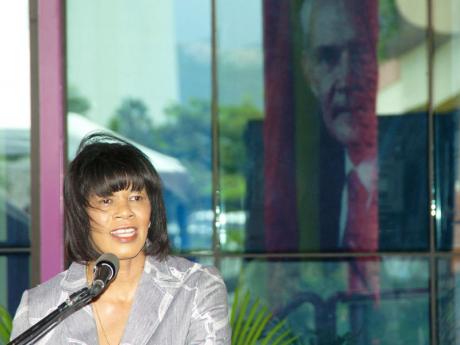 A reflection of Michael Manley looms in the background at right as Prime Minister Portia Simpson addressed a ceremony for the renaming of the National Housing Trust headquarters in Manley's honour in 2007. Now, some commentators have questioned whether Manley's legacy has been betrayed.-File

Seriously! Did anyone even think to ask why the National Housing Trust (NHT) has a surplus so large that it can lend the Government $45 billion? While Attorney General Patrick Atkinson speaks with his usual infallible legal knowledge, Finance Minister Peter Phillips asserts with his customary stridence, and attorney Hugh Wildman once more seeks to make legal history, thousands of Jamaican workers who have contributed to the fund for decades are homeless.

This is a major indictment on the Government, which admitted that it has a shortfall in its supply of some 400,000 units. Despite the assurance from NHT Chairman Easton Douglas that it is now building a cadre of small and medium-size contractors, this should have been done years ago. Had this been done a decade earlier, all the political fencing and legal gymnastics would have been obviated and fewer Jamaican workers would have to go to work from rented houses or would be 'cotching on their families' eye tops.

This is the third chapter in the saga of the milk-the-NHT story. In many ways, it is like the Jack and the Beanstalk fairy tale where a giant had his own resources, a golden egg-laying goose, and a hungry boy who misused the last pittance which had been entrusted to him. Jack bought some beans which were of no use, and they were discarded. Somehow, the beans sprouted and grew into an enormous vine.

For some strange reason, Jack climbed the vine and found a giant living there, minding his business and probably saving his magical poultry for his yet-unborn children, who clearly would have had oversize appetites.

We were lulled into a stupor by the storytellers, who taught us inane rhymes of Jack jumping over the candlestick, cows jumping over the moon, and rub-a-dub-dub, three men in a tub. Somehow, it never occurred to us that the poverty of Jack and the failure of his stewardship with the last bit of family wealth did not justify him stealing from, and ultimately killing, the innocent giant.

There is something fundamentally wrong about taking something that belongs to somebody else and using it for one's own purpose. Worse is if using it prevents the owners from ever getting the benefit of it. To those of us with a sense of justice and right and wrong, there was something very 'fowl' about the theft of the golden goose.

The first chapter in the drink-the-NHT milk tale began under the previous configuration of the post-Pattersonian People's National Party (PNP). Some $15 billion was drawn from the Trust to finance inner-city housing. Hundreds of units were provided, virtually free of cost, to residents of several communities. However, it was more poor relief rather than assisting the working poor to own their own homes. The fact is, a modern PNP, which embraces the poor as its own, went overboard and gave houses to persons who did nothing to earn them.

More than a slap in the face, it was a kick in the hindmost, even as workers were being told that they had to bend over backwards and accept a wage freeze. At a time when the Survey of Living Conditions demonstrated that the majority of persons listed as poor were employed, and the Government was not passing laws to protect workers from further abuse by employers, this was a demoralising blow. Yet, many public servants, with more than a decade of faithful and diligent service, were left adrift like abandoned seamen and told to band their bellies, be brave, and suck it up.

SPECIAL ATTENTION FOR THE POOR

When Michael 'Joshua' Manley initiated the NHT in 1976, he was fully aware that the poor needed special attention. He introduced Special Employment Programmes, which is the same chassis that the JEEP is built on today. However, he recognised that something had to be done by the State to improve the chances of the average hard-working Jamaican to own a little piece of land or even a glorified matchbox that predatory developers passed off as houses in the 1960s to 1990s.

It was not charity; the NHT was supposed to be a pooling of resources, like a cooperative, designed to benefit those who contributed. Thus, to have persons reaping the fruits of the labour of the working poor was painful, especially for public-sector workers, who worked for a government that seemed to betray them.

In the second chapter of the suck-the-NHT-like-a-mother pig story, the recently cast-out JLP administration had licked its lips as it lusted after the fat assets of the Trust. Try as one might, inasmuch as the Trust is robust and has a strong capital base, there is no free ride. Thus, to take money from the pool could still likely require increasing its interest rates.

Indeed, then Leader of Opposition Portia Simpson Miller, in April 2008, warned, "In this environment of high prices and uncertainty, how could anyone with a conscience want to add to the pain of thousands in this way ... . Rather than looking to increase the interest rates at which the NHT lends, we should find innovative ways to cushion the effect of high costs on the working poor, middle-income earners, young professionals, and single-headed households."

Nonetheless, for all the Dudus backing, Manatt hiring, truth hiding and lie telling, the Labourites led its finance minister to the trough, but the horse didn't drink. Perhaps the same lawyers, who advised the then justice minister not to sign the warrant for Christopher Coke, gave the JLP foolish legal advice to not touch the funds because it was not lawful to do so.

Nevertheless, the budget-starved JLP, in 2008, attempted to take some $45 million to ameliorate the impact of the drought. However, a board, headed by Howard Mitchell, an inexperienced attorney with a mere 30 years of practice, dissuaded the Government from making such an illegal move and thus, rather than trying something fishy, it simply didn't touch the kitty.

Yet, although it is not well known, Prime Minister P.J. ("Law is not a shackle") Patterson, did touch it at least once. Sucking $5 billion for the Education Transformation programme in 2003, the government, led by an attorney with more than 40 years at the Bar, saw nothing illegal with it. Two lawyers; two different views.

Now, the third and final chapter of the NHT tale from the crypt. The country is broke. It is in a situation similar to that of an unemployed single mother who has to pay mortgage and her car loan and feed her three children. She has a trust fund for the youngest and can only legally use it to feed, clothe and school him alone.

Yet, if she obeys the law in the short term, she cannot keep her vehicle, which she needs to start work in two months, and the other children will starve. Worse, she will no longer be a fit person to keep the child whose money she is using.

Tough choices. Let us see if Wildman and others, who are trying to prevent the Government from breaking the law, will gain a pyrrhic victory.