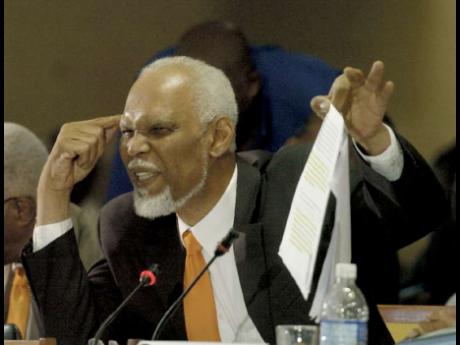 Senator K.D. Knight has insisted that international partners should stem the flow of guns. - File

On the issue of putting a lid on the lotto scam, the Opposition Jamaica Labour Party has accused the Government of dropping the ball. They are so right because they were in charge when the problem escalated.

There are two major elements connected to this scourge: the protection of Americans from predatory Jamaican criminals; and the protection of the interest of the Jamaican people, who elected representatives to govern in their name. Government might have dropped both balls.

The lotto scam is a major source of embarrassment and danger for the Jamaican people because it tramples on Brand Jamaica. This has to be paramount because the interest of Jamaica comes first, second and third. Whatever be our foreign policy or relations, our governments are put in place to do what benefits us and what reflects the popular will, or 'national interest'.

So let us start where we need to begin. Somewhere around 2007, the first set of reports started trickling in about a network of young Jamaican criminals who apparently colluded with persons in the United States, or the remittance services, to obtain information on American citizens and then milk them of their hard-earned dollars. It is a massive use of energy with some 30,000 telephone calls made each day to the United States by these criminals.

Doubtless, the lottery scam had had a massive impact, and it is estimated that as much as US$300 million annually has been stolen from mainly old and vulnerable Americans. The typical victim is a senior citizen who has dementia. At least, that is the poster child.

I am sure, however, that the list of victims contains plain dumb and dumber as well as a few dishonest people who are so dim-witted that they think they can get something for nothing. Scamming people is something we have learnt well, what with Allen Stanford and Bernie Madoff, who have tricked thousands of Americans, among others, out of billions.

Nevertheless, scamming has had an even greater impact on Jamaican society. Close to 700 murders might be connected to the activity, facilitated by the unchecked flow of guns ostensibly from North America. The American south coast is extremely porous, and the US authorities are very concerned about the vessels, cargo and passengers that emanate from outside its borders. However, ask the American Border Patrol or Coastguard about the number of boats or drug smugglers it apprehends trying to leave its waters, or the amount of drugs, or other contraband that is expatriated. For all the awful suffering that it has wreaked on the gullible American victims, it is devastating this little piece of rock, an argument passionately made by government senator K.D. Knight as he called, amid passage of an amended lotto scam law last Thursday, for a quid pro quo on gun control from international partners.

How crime AFFECTS GDPBetween the estimates of former UWI economics professor Al Francis in 2003, and the Violence Prevention Alliance (VPA) in 2009, the impact of crime is a whopping four per cent of Jamaica's gross domestic product (GDP). Simply put, the lotto scam and the guns which are imported from 'farrin' have a greater impact on Jamaica than they do on the USA.

On the other hand, we have such vigilance in protecting what leaves here that government agents have strip-searched national honouree, sports icon and advocate for the disabled, Sarah Newland-Martin, who has been been subject to humiliating searches. True, she is not a sexy young woman and her name isn't Myrie, but what we did to her is worse because she was in her country that she had served for more than 40 years. At least the Barbadians did not know who she was. We do not look after our own.

For the past seven years, since the justice minister quietly and surreptitiously signed the extradition order for Ramcharand et al, it has been my contention that the Government has not been vigilant enough in focusing on Jamaican interests. A baffled uber-veteran attorney, Frank Phipps, could only remark: "The minister must again have acted with unseemly haste when signing the warrant to allow Williams' removal on Sunday morning. It is my sincere wish that the Government of Jamaica will exhibit more concern and consideration for the best interests of the citizens of the country in preference to the interests of another country ... ."

ONE-WAY TREATYThen, amid all the furore surrounding the process that led to the killing of the Tivoli 73 and the only legal exportation of Coke in our history, it was revealed that there had been a secret agreement between the American government and the security minister based on the Mutual Legal Assistance Treaty (MLAT). This treaty seemed to work in a very unilateral way, and the only thing that we seemed to be getting from it was the removal of the threat that our visas would be difficult to get or keep.

It's not the contention that the Americans are selfish and wicked. Rather, it is that the 435 congressmen and women and the 100 senators are elected to serve American interests, not ours. Unless ours do the Peter Tosh thing and 'stand up for our rights' by telling the Americans what we wanted from the treaty, they will simply focus on their own interests - as they are required to do. The case should have long been made that mutual means reciprocal.

Nonetheless, the MLAT is so lopsided in its application that it should really be called the Foreign Legal Assistance Treaty (FLAT). This FLAT has been used by successive justice ministers to export dozens of Jamaicans, but never seems to give any mileage to Jamaican interests. In my column in this newspaper on April 2, 2006, I griped: "... There is a one-sided accord to send Jamaican nationals to the United States for crimes, which may even be committed in our jurisdiction. Yet, an American who illegally exports guns to Jamaica or commits other crimes against us cannot be extradited here." It's old news, but better late than never.

Still, even if we manage to capture and extradite a few tens of the scammers, that won't solve our problem. We have to find ways of reducing the number of idle youth. The profile of the typical scammer is very different from the traditional murderous thug. He is stereotyped as a young man who speaks relatively good English, has a penchant for drama and acting, and is on the borderline of masculinity and femininity.

Although Senior Superintendent of Police (SSP) Fitz Bailey built a profile from his data, he was dragged over the coals. While I am not necessarily saying that it is absolutely accurate, the fact is that Jamaican culture pushes male fluency and communicative skills underground because of the stigma attached to it. Thus, oftentimes, those who speak and write well are somewhat comfortably androgynous, but no less dangerous than those young men who speak as if their vocal cords contained ram goat DNA, and slaughter the language like some politicians who flood Parliament with malapropisms.

In 2007, neither of the two political parties pushed a youth policy as a comprehensive part of its electoral campaign. This was despite the fact that more youth were staying in school and for longer than in 1990; the population was becoming more educated but, antithetically, the youth unemployment rate was four times the adult rate. So the country was producing a growing army of smart boys who could speak relatively good English, modify their 'haksents' and join the scam. This is not rocket science; it is social sciences, and the UWI academics said so long ago.

The Devil finds work for idle hands. Unless the stream is stemmed, the FLAT and the FOCA won't succeed.