What the IMF? Devaluation again! 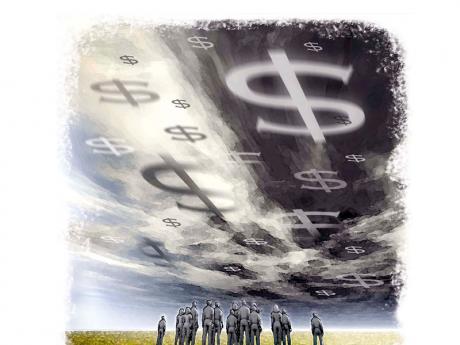 For me, devaluation is a four-letter word and makes me as nervous as a drug mule passing through immigration and customs. This is so because, in the experience of this little island nation, since the first time we did it without protection from our main partners in trade, the benefits have been as elusive as a politician at a commission of enquiry.

With floodlights, bottle 'toach' and even bloodhounds, I have searched the economic history of the country, including the relationship with the International Monetary Fund (IMF). The benefits have been as easy to find as the 'wutliss' father of the generous trusting girl's child.

Representing the Fund, Dutchman Jan Kees Martijn, speaking in the wake of the departure of St Lucian Dr Gene Leon, said that the local dollar was overvalued. This is a different argument than in 2010, when it was teetering just below US$1: J$90, and the then IMF representative pretty much said that it was not.

The logic of the reduction of value of a national currency is simple; even simplistic. With a devalued currency, the price of Jamaican exports will fall like a tourist who went out too far on a tamarind limb.

With low prices, it will be cheaper to buy Jamaican and the foreign countries will gobble up the things we send abroad. As a result, we will increase our foreign exchange earnings, because the cheaper the exports, the more people will want. They teach that in any introduction to economics course.

But, this is not a textbook, and we do not live in libraries or bookshops. For practical persons who produce watermelons and tomatoes in St Elizabeth, dropping the prices is not going to make the Kingstonians suddenly come and load a truck.

Think of this: A shop uses four blocks of ice per week. It has an icebox which can only keep one per day. There is no way you are going to buy more ice, if the cost drops. However, you will save some amount on your cooling bill. On the other hand, the iceman will end up earning less from selling the same quantity, and will literally see his earnings melt away.

It is not simply economics or high science. It's common sense. If there is no increased desire for what is produced by a country, nobody is going to buy more. So, conceptual economists can talk about effective demand as much as they want. I say, "Show me the money!"

Still, how can we hear that the Jamaican dollar is overvalued, yet the expert doesn't know what is the ideal. So then, how does one get to the concept of something being overinflated without indicating what the benchmark is? Apparently catching the same disease of 'evasivitis', which is endemic among our politicians that he has to interface with, Kees Martijn could not say how much the Washington-faced bill should be worth in Jamrock.

How scary is the prospect of the specialist, who is making an evaluation of the status of your health, telling you that you need to lose weight, as you prepare for surgery, but is clueless or unwilling to advise? Worse, you are already anaesthetised and strapped in for your penultimate prostate test before the incisions.

Nonetheless, let us look at the evidence best taught by history.

Up to 1977, the Jamaican dollar was stronger than the American. At US$1:J$0.90, it was like Usain Bolt to Tyson Gay. Then the IMF girthed the Government, and the exchange rate went up to US$1:J$1.25. The country went through several more devaluations during the next three years, to end 1980 at US$1:J$1.78. And the result? The balance of trade deficit was the only thing that grew in the economy.

True, it can be argued that the socialist Michael Manley People's National Party got a raw deal from the Americans and IMF because of his perceived anti-US and anti-capitalist stance. Therefore, the recriminating measures taken by the two might have distorted the true economic effect.

Similarly, the Edward Seaga-led Jamaica Labour Party administration, from October 1980 to the end of 1983, received more favourable terms. Thus, this could also lead to some economic skewedness.

However, when we look at the trade deficit with the United States from 1985, when we had reasonable liberalisation, and free trade, as well as preferential access to the American market, the argument behind devaluation is unimposing.

By the end of the Jamaican economic miracle of the 1980s, the Uncle Sam dollar was worth J$5.58. But exports to the US were US$272 million, and the trade deficit with it was US$131 million. At the end of 1988, the currency appreciated slightly to $5.51. However, this saw imports from America jumping to US$761.7 million, and, contrary to theory, exports also increased. The deficit was a historic US$318 million.

This same paradox continued until the end of 1989 when the dollar reached J$5.77. Apart from 1990 and 1992, when there were short dips in the deficit, as the Jamaican dollar slid, the pattern of falling dollar leading to increased imports from the USA and thus, increasing trade deficit, continued.

By 1995, when the World Trade Organization was inaugurated, we were importing US$1.4 billion in goods and services from 'farin', exporting a measly US$847 million, and facing a deficit of $573.3 million. And oh, by the way, the Jamaican money had fallen on Bustamante's face, to $35.35.

As we started the new millennium in 2001, the trade deficit was a frightening US$945 million. Imports were valued at US$1.4 billion, and standing on the back of a weak Jamaican dollar, we exported an embarrassing US$460 million. All this was when the exchange rate was US$1:J$46.08.

Closing out 2004, we imported US$1.4 billion and sold only a 'likkle tups' of US$319.7 million to the foreigners, who were clearly not impressed or encouraged by the slithering exchange rate, which pushed the American money to J$61.34. Then, as the year 2007 was assessed, we set another import record of US$2.3 billion in imports and churned up a massive deficit of almost US$1.6 billion. Unfortunately, even at $69, the Americans were not sucking up our exports, which lagged behind at US$720 million.

Worse, when the data over the past four years are crunched, we see a linear increase in imports from US$1.4 billion to almost US$2 billion, and the deficit mounting from US$973 million, to a whopping US$1.48 billion.

So, maybe the Dutchman has a different dataset from what we have; but the devaluation argument makes no 'cents'.