HARD ROAD TO GROWTH - PM says while inevitable IMF pact may cause pain, Jamaicans can look to better days 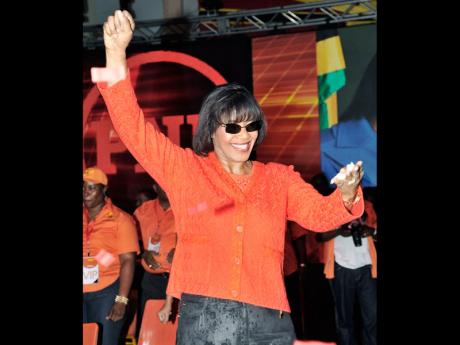 Simpson Miller: It is not going to be easy; it has not been easy. … We know things are not as we want it [but] we feel confident about the future. 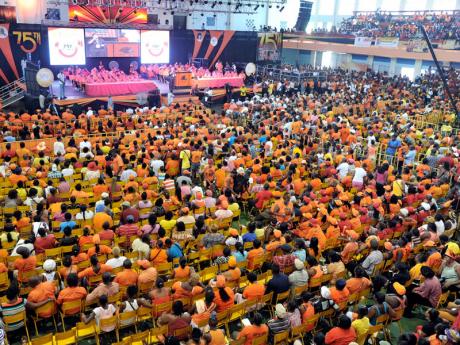 ADMITTING THAT the agreement signed between her administration and the International Monetary Fund (IMF) has not been painless for Jamaicans, Prime Minister Portia Simpson Miller said her Government has introduced measures to ease the burden on the poor.

Speaking yesterday at the People's National Party's 75th Annual Conference at the National Arena in Kingston, the prime minister argued that an agreement with the IMF was inevitable.

Acknowledging that the terms of the agreement, which was inked in May, have been challenging, Simpson Miller pointed out that the accord would ultimately pave the way for sustained economic growth.

"It is not going to be easy; it has not been easy," the prime minister told thousands of party supporters who crammed the arena to hear her presentation.

"We know things are not as we want it," Simpson Miller said, while adding that the economy is already beginning to show signs of recovery.

"We feel confident about the future," the PNP president said.

"I go to the supermarket regularly and I am fully aware of the difficulties that are facing our people at this time," she said.

Simpson Miller underscored her Government's commitment to create jobs to improve the quality of life for Jamaicans.

Commenting on programmes implemented by her Government to assist the poor, Simpson Miller cited the Jamaica Emergency Employment Programme, which provided temporary employment for over 30,000 Jamaicans. She also told supporters that payments under the Programme of Advancement Through Health and Education have been increased, while minimum wage and National Insurance Scheme benefits have also been adjusted.

She said the economic growth being targeted by the Government was expected to come from small and medium-size businesses.

The proposed logistics-hub project was also highlighted by the prime minister, who described it as a national priority for the Government.

She said the initiative has received wide support from the local business community and has been endorsed by the IMF, the World Bank, and the Inter-American Development Bank.

"I believe it is a key element in the Government's growth agenda."

Simpson Miller said the Government "will do everything in our powers to secure the investments that will expand our economy, always expanding our awareness of the importance of our environment for sustainable development".

She said the logistics-hub project was not solely confined to big-money investors, but noted that players in the small, medium and micro-enterprise sector would also benefit.

"We need small, medium and large investors to answer the call … . We want to create jobs to improve the quality of life of our people."

In the meantime, incensed by the incidence of child abuse, Simpson Miller took direct aim at men who rape or molest children, saying she has given instruction to Justice Minister Mark Golding to craft special legislation to clamp down on those who commit these crimes.

The prime minister warned that DNA legislation was coming to identify perpetrators who prey on children.

Labelling child abusers as "cruel, evil and wicked", a tough-talking Simpson Miller said, "enough is enough", declaring that strong action would be taken against child abusers.

"I say to those of you who believe you can prey on little children, stop it! I have spoken to the minister of justice that we should craft legislation so that DNA can prove a rape or molestation, so that no one can go free when they (commit that crime)," she said.

"I want to appeal to those possessing evil, brutish minds, … take your hands off those little girls."

The prime minister had a message for schoolgirls who are approached by older men: "… Just say to them as I told one man when I was going to high school, … 'I cannot take two lessons at the same time'."

Simpson Miller called on communities and parents to play an active role in protection of the nation's children.