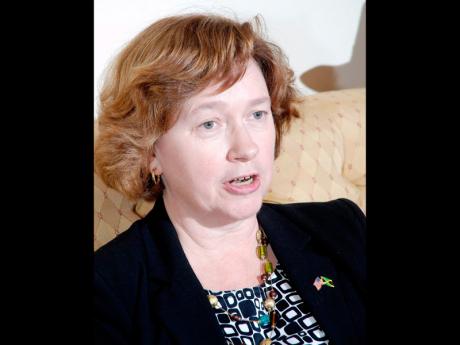 LESS THAN 24 hours after Elizabeth Martinez, deputy chief of mission at the United States (US) Embassy in Jamaica officially took up her post, she has pledged to work assiduously with the region and Jamaica in particular to strengthen the Caribbean Basin Security Initiative (CBSI).

In an interview with journalists at the US Ambassador's residence in Kingston on Friday, Martinez hailed Jamaica for the leading role it has been playing in this critical security initiative.

"Jamaica is emerging as a leader in that initiative and I would like to see it become more concrete and develop even further," she said in her first interview with journalists locally.

Martinez has been described by US Ambassador Pamela Bridgewater as a veteran diplomat who is "very experienced, very knowledgeable and competent."

She brings to the job a "lot of experience in the western hemisphere", serving twice in Brazil and was a director of Canadian affairs. Additionally, she worked in The Bahamas, El Salvador, North Africa, Morocco and Tunisia and had a wealth of experience serving in the US State Department.

"I have extensive contacts both back in Washington and in the region as well and I think that will be a big help here," she said.

The CBSI is the latest pillar of a US security strategy focused on citizen safety throughout the hemisphere.

The initiative brings all members of the Caribbean Community and the Dominican Republic together to jointly collaborate on regional security with the US as a partner. The US has made a significant contribution to the CBSI, committing $203 million in funding for the first three years of the initiative.

As part of the CBSI, the US and the Caribbean have identified three main objectives to deal with the threats facing the region.

Another objective of the CBSI is to promote social justice through programmes designed to combat government corruption and to assist vulnerable populations at risk of recruitment into criminal organisations.