Brown's late strike does it for Cavalier 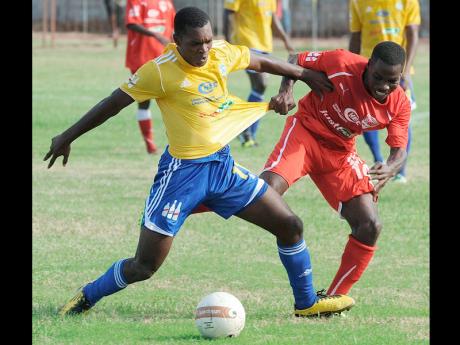 Waterhouse Football Club, on a high since a big Red Stripe Premier League win over Boys' Town last Sunday, were brought down to earth by Cavalier yesterday at the Waterhouse Mini Stadium.

A goal by Girvan Brown in the third minute of second-half stoppage time saw Cavalier register a second consecutive 1-0 victory having defeated Portmore United in their opening game.

"It is a pleasant win; we stuck to our passing game and got the winning goal late," Cavalier's coach, David Laylor, said.

"We got two easy chances to score, but failed to do so, and we were punished late in the game; that is how football goes sometimes," Francis said.

The two other matches that were completed at press time ended in stalemates.

Defending champions Harbour View and Boys' Town are still searching for their first victories of the season after playing to a 1-1 draw at Collie Smith Drive. Second-half substitute Donovan Edwards, capitalised on a defensive error by Boys' Town to fire home in the 79th minute to cancel out a superb first-half strike by Asrick Samuels (44th).

"We really wanted to come off the mark today and I think we played well enough where we could have earned all three points, but a defensive lapse very late in the game cost us today," Boys' Town's coach, Andrew Price, said.

"The leadership in the team is a little bit weak right now, but that will improve as we go on," Thomas expressed.

Promoted August Town had their keeper to thank after they emerged from the Anthony Spaulding Sports Complex with 1-1 draw against Arnett Gardens. Newton Sterling netted for the 'Junglists' in the 42nd minute before Richard Orrett (56th) pulled August Town level.

The other promoted team, Rivoli United, held five-time league champions Tivoli Gardens to a 0-0 draw at the Spanish Prison Oval. This was the Spanish Town-based team's second draw in as many games after playing out a 1-1 draw with fellow promoted outfit August Town last week.

At press time Sporting Central were looking to build on their opening round victory over Harbour View as they play away to Montego Bay United at the Montego Bay Sports Complex. In the third game Humble Lion were hunting their second win against hosts Portmore United at Ferdie Neita Park.