Seventy years of JLP - Who's next? 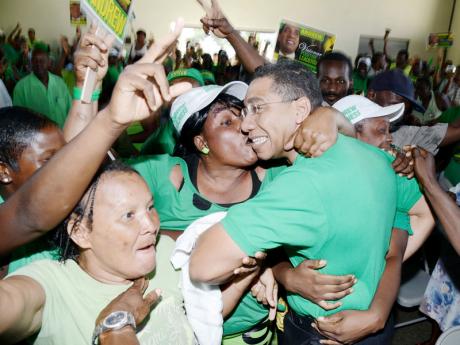 This is really a 'foul' fight, and this cockroach doesn't belong in the middle. After all, two wrongs can't make one Labourite. 'Man-a-Yard' Audley Shaw must have awakened and smelled the coffee, and Andrew Holness knows he is in for a fight for the leadership of the Jamaica Labour Party (JLP).

It is a gutsy challenge, and Audley is hoping that his efforts don't go to 'waist'. However, there is conflict in the roost when the party should return to its roots. If not, it will remain in the fowl 'coob' for as long as Portia Simpson Miller leads the People's National Party (PNP).

The problem is, the JLP was born from the belly of the workers' movement and formed out of workers' discontent in the 1930s. Having joined the protests of 1938 long after the real leaders, A.G.S. Coombs and St William Grant took blows from employers, Alexander Bustamante surfed the wave and became labour leader, reaping the harvest of the struggles of these and others, including women who were skilfully excluded from the narrative.

Yet, the seeds of divisiveness were sown since the inception of the party, when Bustamante split the labour movement into two. Bustamante was a founding member of the PNP, and apart from being part of the economic 'elite' was seen as the labour leg of the second of Jamaica's great political parties. For historical accuracy, his Bustamante Industrial Trade Union (BITU) was registered in 1939, after the national labour uprisings in 1938.

Bustamante had the potential to do what Marcus Garvey had prescribed: becoming the first trade unionist and labour leader to be elected to the Jamaican Legislature. Thus, his job would have been to ensure workers' interests were addressed. However, overplaying his hand, he was incarcerated under orders of Governor Sir Arthur Richards.

During the two years that Bustamante was in detention, it was Norman Manley who ran his BITU and did so much better than he ever did, successfully negotiating the first collective labour agreement for Jamaican sugar workers in history. Yet, rather than keep the unity and show appreciation for the work that his cousin, who cooked a good soup for the workers, had put in, he broke with the PNP as soon as he was released and founded his JLP in 1943.

For the next 20 years, it was Busta's one-man show, and his legitimacy as leader was unchallenged. He was not a democrat, and did not welcome differences of opinion. Carrying a grudge for Coombs, who had earlier refused to allow him to take over the Jamaica Workmen Trade Union, he rejected the olive branch. Later, Busta had to be restrained to protect a dissenting Felix Toyloy, JLP member of parliament for South Trelawny, from feeling his fists.

Despite losing the general election in 1955, he remained a popular figure and was regarded as supreme party leader. Even after he had surrendered de facto power to Donald Sangster in the mid-1960s, it was strictly 'Chief' in charge.

The transition to Sangster was relatively smooth, since the latter was already in the driver's seat. However, his appointment was not the result of a democratic process, whereby grass-roots Labourites voted for him. He was hand-picked by Bustamante. In 1967, after the untimely demise of Sangster, BITU officer Hugh Lawson Shearer, a blood relative of the same cloth of both Manley and Busta, was ushered in like a crown prince. He was Bustamante's choice, and whatever pills he might have been taking, there was again no election.

For the poor, black Jamaican worker, the 1960s was a major disappointment, in that a Labour Government did little for him. True, it was a period of unprecedented economic growth, but most of it did not filter down to the lower classes; and, strangely, the Government felt it necessary to purge the nation of the Garveyite influences of black pride and identity and denigrated and oppressed Rastafari. Moreover, apart from the National Insurance Scheme (NIS), there is little else of which that JLP Government could boast.

Notably, up to 1972, the JLP was the party of the poor and undereducated, and its founder had half of those qualifications. It was the PNP that comprised bourgeois, intellectual and mostly 'topanaris'. Having lost its touch with the underclass, on whose back it rode to power, the JLP was beaten so mercilessly in the February election that the Reggae Boyz look like champions in comparison.

Ironically, Michael Manley shifted the base of the PNP, turning it into a truly roots party, while a shell-shocked JLP tried to redefine itself. The answer came in the form of sociologist Edward Seaga, who had studied the culture of the underclasses and used it to his advantage. There was no Pocomania or 'sciance' to it, but Seaga offered a 'revival' of the JLP when he challenged Shearer for the leadership. It was not the most pleasant of contests. Again, there was no democratic transition via the JLP electorate, and Shearer was booted.

Having 'donned' the leadership of the party, Seaga lost the 1976 election before delivering his only legitimate victory to the JLP in 1980. His penchant for democracy was evident in his holding an election on the outdated voters' list in 1983, while a hapless PNP unwisely stayed away, allowing all seats in Parliament to be filled by Labourites, and Seaga to unilaterally appoint all senators, including 'independent' ones.

For all one might think of the 'One Don', we should be grateful that he did nose his parliamentary unanimity to change the Constitution and turn himself into a Latin American-style dictator, after the PNP egotistically abandoned the working class. For the record, and once more I thank him for the correction, Seaga did create the Office of the Contractor General in the 1980s.

Nonetheless, his failure to address workers' concerns, as a labour party should, widened the gap between rich and poor, and in a country where the majority of poor people were employed, it is understandable why, across four polls, he suffered from serious electile dysfunction, despite his vim vigour and vitality.

Still, he faced challenges in 1990, when the Gang of Five, comprising Pearnel Charles, Douglas Vaz, Errol Anderson, Karl Samuda and Edmund Bartlett, unsuccessfully tried to unseat him. Later, Brascoe Lee led a mutiny of the Western 11, prophesying that the JLP would never again win under his leadership. Undaunted, Seaga declared that none other was capable.

However, if fewer than 70 per cent of the delegates supported him, he would depart. His 79 per cent affirmation at the general conference is perhaps an indication of what the JLP needs to do to concretise the legitimacy of its leader.

Later, after he departed in a fashion that seemed to dishonour his contribution to his party, the contest to succeed had nasty things coming from the mouths of Labourites. In the end, it was a repatriated Labourite, Bruce Golding, returning from the hinterlands of the winless National Democratic Movement, who was chosen. It again was not a brotherly contest, and the democratic process was in question.

After the Dudus debacle and the fugue of Golding, the monikered Driva left the wheel to Holness and before foundation DJ, U Roy, could say, "Dabdoub daboub dabba day." Holness was given a big load to carry. He was to unite the party and beat a woman for the first time in his life. Needless to say, he dropped the ball on both.

Still, Holness was not elected democratically, but was given a lubricated conduit, and for some, he came in through the back door.

History is calling, and Holness must show that he can win a challenge from within his own ranks. He should be happy for the test because there are far more PNP electors than there are supporters for Shaw. In the end, it will be the Jamaican people who win, because a democracy needs a popular, legitimately elected Opposition.

I am unsure who the better candidate is: Portia is a populist and Audley Shaw is a good demagogue. Nevertheless, the JLP might need someone who can be the equal of Portia's intellect, and Holness might just be the one.