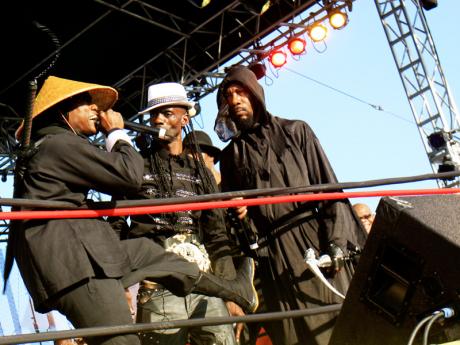 Annual event to be shown live in five continents

Sting may be known for its yearly clashes and hardcore performances, but with headliners such as Super Cat and 2 Chainz, the organisers of the event intend to make their 30-year-old product, a global one.

Speaking with Entertainment following the announcement that dancehall big name Super Cat and rapper 2 Chainz will be the headline acts at the show on December 26, Joe Bogdanovich, one of the organisers, promised that reggae and dancehall will be shown in a positive light.

"This is an international show. My mission is to uplift the music industry, and this year Downsound Records and Supreme Promotions have collaborated to celebrate Sting," he said, of the event that was first held in 1984 at Cinema 2 in New Kingston.

"Thirty years of the same concert on the same day, every year, rain or shine, feast or famine. Thirty years, that is hard to do. A lot of people say a lot of things about Sting, but it has contributed a lot to the industry."

Bogdanovich also stressed that the nature of the show is changing, and that the organisers intend to turn it into a tourism product.

"Sting has a reputation of being a bad boy show over the years. As of last year, that kind of thinking is no longer," Bogdanovich told Entertainment.

"It's about top-quality entertainment that represents the real people of Jamaica. It's about creativity and performances. This year we are targeting a global market. Today's Sting is about showing Jamaica in a positive light."

He added that the show will be different this year, as it will be shown live on television in five continents, except Jamaica.

"More people than you think love this culture. My mission is to show the Government and Corporate Jamaica that your biggest asset is music, reggae and dancehall music. They don't recognise it as being an asset."

While his intentions may be good, one cannot discount the fact that the show has had some very raunchy and lewd performances over the years. However, Bogdanovich said this will no longer be part of the show.

"That's out. It is not relevant anymore. It's not cool," he said.

Despite the image change, he said lyrical clashes will still be a major part of the show.

"The clash is the frosting on the cake. You get that at the end. It's a great tradition. It's the art of war. It theatrical, great theatre. Now you're going to have to use your brain to win," he said.

And, in the event that an artiste gets out of control, he said the microphone will be turned off.

"We are blazing a new trail for the next 30 years, trying to focus on the positives. Show, that it is not about confrontation, but competition. We don't want to focus on the negativity," Bogdanovich told Entertainment.

He also noted that the full line-up for the event will be disclosed later.