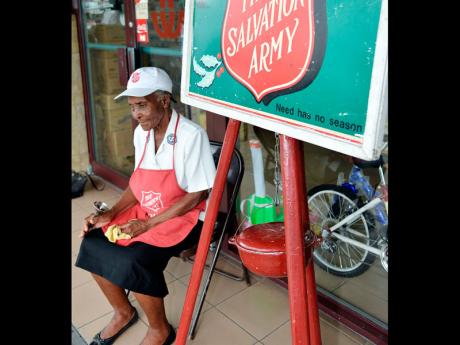 Estelle Arboine of the Salvation Army rings her bell outside her spot at Woolworth, Mall Plaza, in St Andrew. - Norman Grindley/Chief Photographer

Annually, dozens of Salvation Army volunteer corps members wait with kettles outside Scotiabank branches, supermarkets, and other businesses to receive donations for the less fortunate. The volunteers' stories are varied.

Take Estelle Arboine, 83 years young. She joined the church five years ago after visiting for a long time. She's been volunteering with the Kettle Appeal for the past four years, all at the same spot, outside Woolworth in Mall Plaza.

"They (the church) treat me excellent. Mi nuh find no fault wid dem," she said. "If yuh love your church, yuh will do most anything." Arboine said persons of all ages donate to the appeal but she wasn't ready to compare this year to previous ones.

"What you get, you to say 'Thank God,' because yuh neva give nobody nutten fi put down." The donations received by the Salvation Army go towards assisting more than 10,000 families, elderly shut-ins and the homeless.

"When you get thanks for what you have done, it feels like you are truly working for the Lord," she said.

Decades younger but equally passionate, Menard Stephenson, 25, grew up in the Salvation Army family and became a full-fledged member 10 years ago. Originally from Top Hill, St Elizabeth, he moved to the Corporate Area and is part of the building maintenance team at the Army's School for the Blind.

The Gleaner spotted him outside a KFC outlet on King Street, downtown Kingston. This is also his fifth year with the appeal.

"I usually like to help others. Growing up and seeing others like my age suffering, I wanted to help," he said.

Unlike other members, he doesn't have a bell, but that doesn't bother him.

"I like to approach people and greet them," he said. "I think I get a better view and understanding of the people."