BOJ returns $18b to the market - Upward pressure on rates continues 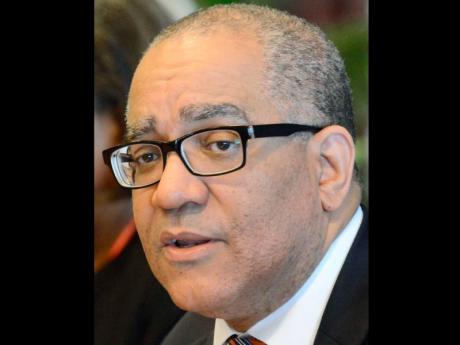 The Bank of Jamaica (BOJ) has introduced 14-day repurchase agreement to provide liquidity to financial institutions.

Using that tool, the BOJ provided liquidity totalling $15 billion at a rate of 7.25 per cent to financial institutions via a series of overnight repos during July 17-23.

BOJ Governor Brian Wynter, speaking at a press briefing at the Bank's offices in downtown Kingston Tuesday, said the open market operations and purchase of foreign exchange resulted in a net injection of liquidity into the system for the quarter to September.

Notwithstanding, he said, liquidity in the system remained relatively tight and concentrated. That situation contributed to a general increase in market-determined interest rates in the September quarter with increases in Treasury bill yields relative to the previous quarter - rising between 30 to 84 points across all three tenors (SEE INSET).

The interest rate payable on the BOJ's 30-day certificates of deposit was maintained at 5.75 per cent throughout the quarter, informed by the outlook that inflation for the fiscal year would be within the target range of 8.5 per cent to 10.5 per cent.

The central bank reported that the economy is estimated to have grown by up to one per cent, following six consecutive quarters of contraction, reflected in improved performance in agriculture, forestry and fishing; mining and quarrying; hotels and restaurants, and construction and installation.

Seasonally higher demand for imports of raw materials and consumer goods contributed to the pressure in the foreign exchange market.

"The deficit on the current account of the balance of payments continued to drive depreciation in the exchange rate for United States dollars during the review period as demand for foreign exchange to pay for imports of goods and services continued to exceed export flows by a considerable margin," said Wynter.

However, the BOJ governor noted that the rate of depreciation slowed to 2.1 per cent in the September quarter following the decline of 2.5 per cent in the June 2013 quarter.

For the review period, headline inflation was 3.7 per cent, above the bank's projected range of two to three per cent, while the annual inflation rate at the end of September was 10.5 per cent compared to 6.7 per cent at September 2012.

The higher inflation rate was attributable to the 25 per cent increase in public transportation costs, as well as higher costs associated with the summer holidays and preparations for the start of the new school year.

There were also lagged pass through of depreciation in the exchange rate to prices which was exacerbated by the spike in crude oil prices, Wynter said.

The BOJ is projecting inflation within the range of two to three per cent for the December 2013 quarter, reflecting the impact of recent increase in the tariff for water and seasonally higher prices for some domestic agriculture products.

The Bank also expects some lagged pass-through of exchange rate depreciation to prices, "but in the contest of continued weak demand conditions, we are projecting that this pass-through will be at the lower levels which have been observed for the fiscal year to date, relative to previous years," Wynter said.

Furthermore, he said, continued declines in international grain prices are expected to have a compensating impact on inflation in the quarter.

Given the outturn to date and forecast for the December quarter, the BOJ is projecting that inflation for the fiscal year will fall within the target range of 8.5 per cent to 10.5 per cent.

Growth in real GDP for the December 2013 quarter is projected to continue at the pace observed in the September quarter and is predicated on the forecast for a strengthening in global growth.

In addition, Wynter said, it is expected that continued implementation of the policies under the International Monetary Fund Extended Fund Facility will provide a boost to investor confidence.