NW who? UCASE in point 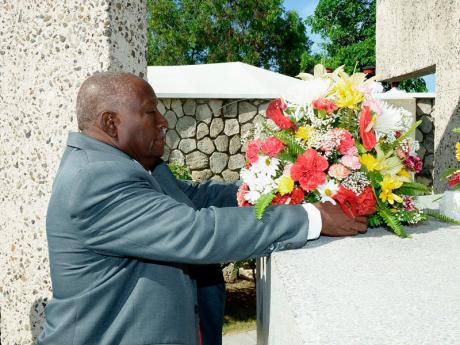 In this July 4 photograph, Vincent Morrison, then president and island supervisor, National Workers' Union, lays a wreath in honour of Norman Manley at National Heroes' Park commemorating the 120th anniversary of his birth.-Ian Allen/Staff Photographer

I had a conversation in my dreams with Michael Manley last night, and he was hopping mad. Now, I know that the dead really have no power, because he would have girthed the three 'protantagonists' of the ugly saga that is embarrassing the entire trade union movement and the working class on the whole.

He was the first, and still only, head of government in the history of Jamaica who embraced our blackness and black culture. Second, he was the first, and still only, pro-worker prime minister, who did not simply talk about his love of the poor or putting people first. Rather, he backed it up with action and celebrated his 25 per cent African ancestry, allowing Rastafarian children to attend school with their dreadlocks.

A black-heart man, Manley made several trips abroad. However, we generally knew what he went for and he was wont to tell the public. Engaging the press, without a coterie of bouncers and apologists, he was putting Jamaica on the global politico-economic map, while keeping his eyes glued on the still-incomplete worker struggle. A consummate intellectual, he understood, and apparently shared, the Garveyian vision that the mandate of political parties was to secure the uplift of Jamaican workers. Especially mindful that the trade union movement did help in the creation of the People's National Party (PNP), he would have accepted Garvey's challenge that workers "... get together and form themselves into unions and organisations and elect their members of the Legislative Council ... . The workers of Jamaica should elect their own representatives ... so that they can talk out without caring whom they offend," and of course, push for laws for their betterment.

History of the unions

The National Workers' Union (NWU) was formed in 1952, when President Vincent Morrison was an infant and General Secretary Granville Valentine and colleague unionist, Robert Harris, were not even lustful thoughts in their fathers' brains. With Manley as island supervisor and eventually long-serving president, it has voting rights in the PNP, precisely because both Manley and his father, Norman, understood. As Manley declared democratic socialism to be the official doctrine of the government, in 1974, the Union of Clerical, Administrative and Supervisory Employees (UCASE) was created, as its name suggests, to cater to white- and light-blue-collar workers. Housed on the same premises as the NWU, its officers have doubled as NWU operatives, and it is unclear if UCASE has a separate legal identity from the NWU. Of course, since unions are not incorporated like companies, this might be where some of the dissonance originates.

Nevertheless, it has been a good 30-plus years since these unions and their party have been involved in any pro-worker statute. For all we have fought, this is a stink that the workers do not need. Therefore, as a union, with voting rights in the PNP, the NWU and UCASE have nothing to boast of, and the officers need to quickly stop making the faux crockery and produce some real chinaware. Its leadership seems to have forgotten what Garvey had outlined in 1929 should have been the direction to go.

Indeed, I have known Morrison for 30 years, Valentine for more than 25, and Harris around a decade. With the latter two, there has been endless dialogue, while they sat in my classes and informally, that there is an enormous amount of work to be done. Jamaican unions represent less than 20 per cent of the employed labour force, and the laws regarding redundancy need serious revamping.

Observed since 1989, the status of female workers is not a fly-by-night matter. Despite a female minister of labour for around 13 years and four years of her prime ministership, the equal-pay legislation still allows for discrimination against female-dominated occupation. It is still illegal for most women to work at night and sexual harassment is still on the back burner, along with other unacknowledged pre-election promises.

For three decades, UCASE had consistent representation in the Senate and the NWU has had its officers in Parliament for aeons. Yet, can anyone tell me how many pro-worker laws were pushed by either since this columnist worked as an officer in the Ministry of Labour in the mid-1980s? The NWU leadership sat by - and there were some officers with whom I spoke directly - and allowed its PNP to pass the idiotic 2002 amendment of the Labour Relations and Industrial Disputes Act (LRIDA). This has led to the increase in workers employed under disguised contracts and labelled 'contractors'.

Much more to be done

What is so reprehensible and myopic on the unions' part is that instead of giving them a shot in the arm, which is what the movement needed since the embarrassing show in the general strike in 1985, the shooting was directed to their feet. How dumb can one be in passively allowing a law to be passed that prevents your members and potential dues payers from being considered workers?

Did you know that in 2002, only two ballots were conducted by the Ministry of Labour to facilitate claiming trade unions gaining new members? Moreover, between fiscal years 2007 and 2011, after a slight recovery in activity, the NWU only participated in 19 ballots and UCASE, eight. Well, since 2011, they have been involved in four and three, respectively. Either they are losing their relevance and appeal or the leadership is focusing elsewhere. This leadership squabble is killing the unions and endangering workers.

Interestingly, but not surprisingly, the PNP's hierarchy could not bring about an end to the impasse. This tells me that the party is no longer attuned to the union and, thus, is not a workers' party as it was under Manley's leadership. Both the party and the union are getting what they paid for.

Nonetheless, this is Black History Month, and this is what happens when black leadership loses its gaze on its past. Manley understood Garvey; let's ask the PNP.