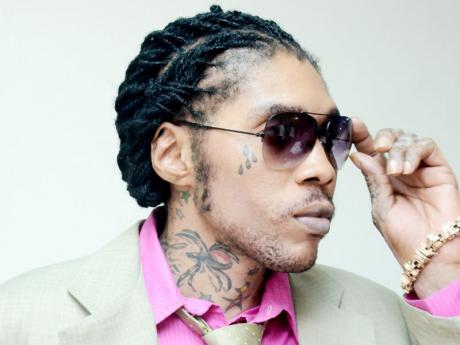 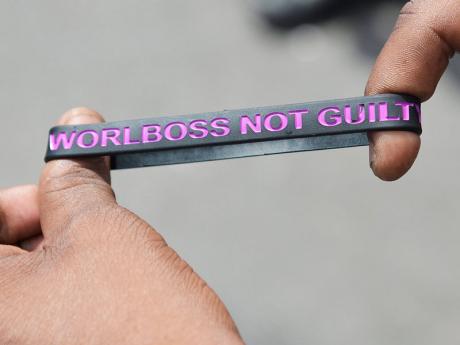 While awaiting the verdict, a Vybz Kartel fan outside the court precincts displays a wristband honouring him.-Norman Grindley/Chief Photographer 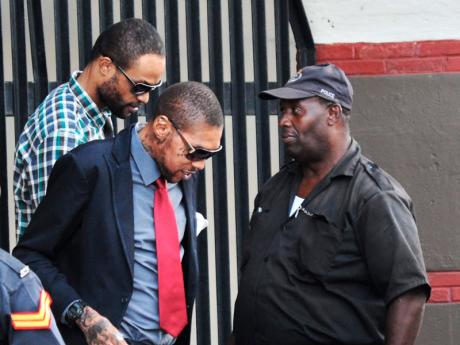 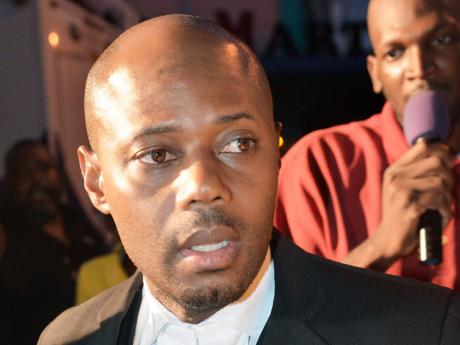 Everton Dewar, the attorney of Shane Williams, the only accused to get off the Lizard murder charge. 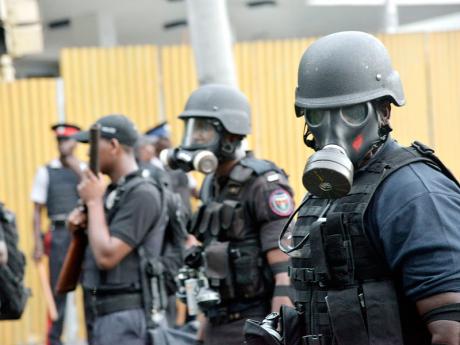 bas masks and all, the police gear up for trouble Thursday afternoon as Vybz Kartel fans awaited the verdict. - Norman Grindley/Cjief Photographer. 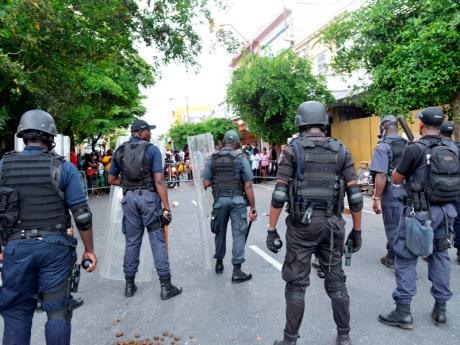 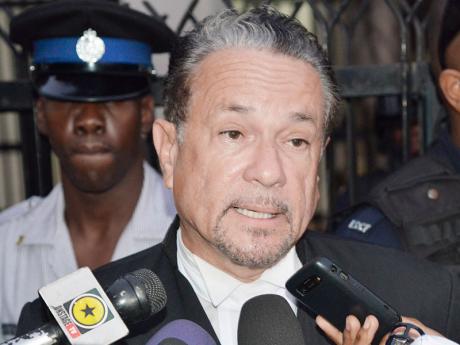 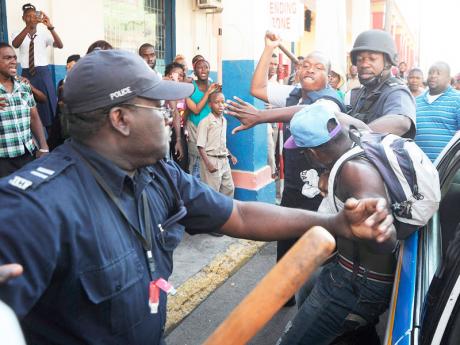 A Boeing 777 disappeared in plane sight, Russia seems on the verge of reversing history and colonising the Ukraine once again, and more than 41 missiles were fired from the Middle East's Gaza Strip into Israel. Yet, the biggest item on national radio, television and in the print media has been the trial of performer, Adidja 'Vybz Kartel' Palmer, of the Portmore Gaza Empire.

Some who have an appreciation of his recordings, performances and lyrics might use terms such as entertainer, recording artiste or simply DJ. I use the latter. Doubtless vindicating his moniker of World Boss, the Gaza king faced the court showing all of his colours and tattoos, kept front page of the news for several months.

On Thursday, as we awaited the verdict in the murder trial involving him and four of his associates, there was the search for relevance. Begging for sociological analysis, some media personalities asked if there were factors in society which link entertainers to crime. The jury came in, with a verdict of 10-1 Kartel, and all but of one his cartel were guilty of the murder for which they were charged.

There is a common argument that dancehall lyrics lead to violence, and this has led to moves to ban or even outlaw some gangster lyrics. Doubtless, music can influence attitude and, ultimately, behaviour. After all, the recording artistes gamble on this likelihood and we use music to rally troops, soothe nerves, or to keep attention and generate excitement in movies and other performances. However, to blame the performers' lyrical content for the scourge of violence in Jamaican society is simply dishonest.

True, there is a long history of Jamaican entertainers getting into legal pickles, and this had led some to argue that entertainers have some natural or social proclivity towards criminal behaviour. Over the years, various entertainers have had brushes with the law. Among these are Don Drummond, who was convicted of the murder of his girlfriend in 1965, and Frederick 'Toots' Hibbert, who took on the penal number 54-46 for what is said to have been a trumped-up conviction for marijuana possession.

In the 1970s, 'slackness' DJ, Earl 'General Echo' Robinson, was killed by the police under circumstances involving a firearm he allegedly possessed. In the 1990s, Shabba Ranks had to face the judge arising from an incident where he clashed with fans of rival DJ Ninja Man, who has had what seems like a lifetime dalliance with the judicial system.

More recently, Jah Cure served time for rape, Zebra showed that he couldn't change his stripes and got a second conviction for sexual offences, and Mikey Spice went 'wukhouse' for a gun. Aidonia, Busy Signal, Alozade, Buju Banton, Bounty Killer, Mavado, and now Kartel are but some of the DJs who have graced the interior of a cell.

But, is there something in the music that puts them there? Is it life imitating art, or is it simply another correlation of another sort? After all, Buju's Driver had too much detail to not have been instructed by experience.

In the United States, the Notorious BIG, of Jamaican parentage, did Niggaz Bleed, an explicit epic of drug trafficking and shooting. His Ready to Die and Life after Death albums have songs that were too close to reality to be simply art. His peers, Ja Rule, DMX, 50 Cent and others have had run-ins with the law. Indeed, both BIG and Tupac Shakur, a convict for a sex offence, met cruel fates under barrages of bullets.

The fact is that dancehall and hip hop both originate from, and are based in, communities and sectors of the society that are markedly similar. Dancehall is ghetto music, the product of marginalised black people, neglected by mainstream society, and who turn their attention inwards, developing their own society with its culture of poverty. Hip hop is virtually the same.

The fact that one arises from the material circumstances that led to some of his peers becoming violent criminals doesn't mean that he is automatically exempt from its trappings.

Thus, as with the stereotypical ghetto youth, many rappers have been victims of ghetto-on-ghetto, black-on-black violence. Similarly, entertainers Errol Scorcher, Pan Head, Dirtsman, Nitty Gritty, Tenor Saw (whose 'hit-and-run' death is disputed), Ranking Toyan, and several others have been killed in typical shootings from their demographic groups.

The simple argument, therefore, is some are merely victims, but there are entertainers whose talent is the only thing that distinguishes them from their peers. That is, thugs who happen to be entertainers.

Our Jamaican police have also noted that they have imposing amounts of information and intelligence that some entertainers are deeply involved in criminal activities. This I don't doubt. However, this does not mean that all entertainers are criminals, or even that the majority of them are.

Thankfully, most artistes of the dancehall and hip-hop genres aren't criminals. Thus, Will Smith, the multimillion-dollar, Grammy-winning recording artiste, has not been involved in the negative trappings, including the gangsta lyrics, and our own Assassin, now Agent Sasco, has been as squeaky clean as a new pair of boxer briefs.

Criminal DJs are no more representative of dancehall than the proportionally larger percentage of lawyers who are disbarred or convicted.

One argument was that dancehall was on trial with Kartel. Nonetheless, one notes that very few entertainers, including those who spew out gun and violence lyrics, came out in support of him. I leave that for the public to deliberate why, but there is a big difference between singing and acting out.

Capleton does not light fires in churches or Gordon House. For all his anti-gay songs, Shabba was never charged for assaulting any of them. Buju did Boom Bye Bye and has faced assault-against-gays charges, and his Driva was a road map to his damnation.

To those entertainers who think that life and art are the same, sing all you want, but watch what you do.