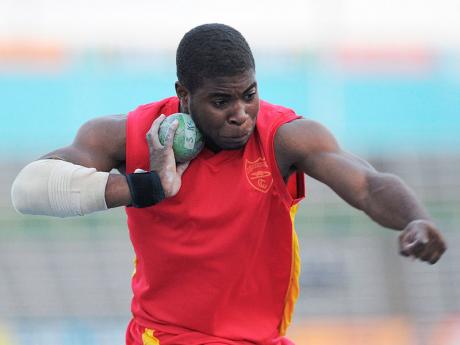 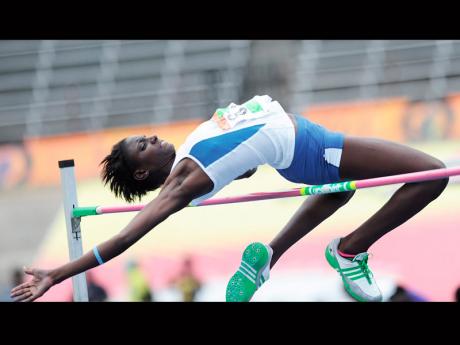 Shiann Salmon of Hydel wins the Girls Class Three high jump final, with a record leap of 1.78m, during yesterday's third day of the ISSA/GraceKennedy Boys and Girls' Athletics Championships at the National Stadium in St Andrew.
1
2

There are still two full days of competition to come at the 2014 edition of the ISSA/GraceKennedy Boys and Girls' Championships at the National Stadium but already the excitement has reached fever pitch.

The National Stadium buzzed with excitement last night as the big guns in the Class One boys 200 metres clashed in the semi-finals.

The exciting Anguillan sprinter Zharnel Hughes of Kingston College was the most impressive of all. Hughes demolished his rivals in semi-final two, clocking 20.32 seconds, seven-hundredths of a second outside the 20.25 record set by Usain Bolt in 2003.

Bolt's mark looks sure to be beaten in tomorrow's final, as Hughes, who did not appear to be at top speed, will be pushed by the quartet of Jevaughn Minzie of Bog Walk High, who won semi-final one in 20.37, Calabar's Javon Francis who was second in 20.58, St Jago's Martin Manley who took semi-final three in 20.57 and Calabar's Michael O'Hara, who finished second to Manley in 20.60.

In the Class One girls 100m, Monique Spencer of Edwin Allen carries the best time into today's semi-finals. The Edwin Allen High standout ran 12.02 seconds in the preliminary round.

Earlier in the day, Cornwall College's Warren Barrett Jr had a record throw of 18.18 metres to win the Class Two boys shot put. Kevin Nedrick of Petersfield won silver with 16.08m and Kyle Mitchell of Wolmer's took bronze with a throw of 16.03m.

On Wednesday night, O'Brian Frith of Holmwood, added his name to the record books by winning the boys 2000m steeplechase in a record 5:59.70.

Shiann Salmon erased the old standard in the girls Class Three high jump with a record height of 1.78m. Her outstanding performance was the catalyst for Hydel's massive leap up the girls standing.

"This is new territory for me but I am happy to have won convincingly and now I can turn my attention to bigger things," Salmon said after her win. Rusea's Lamara Distin, 1.70m, took silver, leaping 1.70m and Shania Ingram, the bronze also with a height of 1.70m.

In the boys triple jump action, Kingston College's Gavin Gibson had the best jump heading into today's final. His distance of 15.51m leads the field ahead of Odaine Lewis of Cornwall College 15.49m and Obrien Wasome of Jamaica College 15.31m.

After four finals in the boys' section, Jamaica College lead with 28 points, Kingston College are next on 27 points, Edwin Allen - 15, Calabar - 13, and St Jago - 11 round off the top five.