A day in the life of Warren Weir - Big dreams, big heart 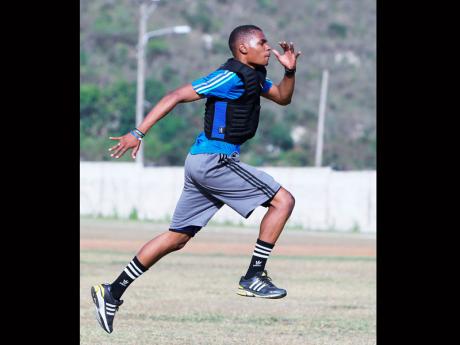 Warren Weir works out in the gym. - Photo by Jean-Pierre Durand for IAAF 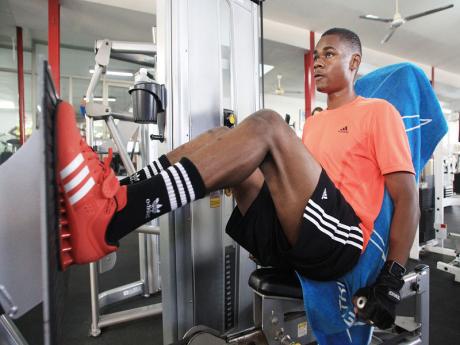 At the 2012 National Senior Championships, he crossed the line in third place behind clubmates Usain Bolt and Yohan Blake, booking his 200m ticket to the London Olympic Games.

For many inside and beyond the oval walls of the National Stadium, it was a considerable surprise.

Minutes after that life-changing run, with a knowing smile, Weir's coach, the highly respected Glen Mills, labelled the wire-framed sprinter as the 'heart and soul' of his Racers Track Club; quite an endorsement for an athlete that was barely taking his first strides in international senior competition.

Last Tuesday, Olympic rings inked on his right arm with Jamaica's national bird hovering above, Weir, no longer the bright-eyed neophyte, sits comfortably before a group of journalists from all over the world, during a special IAAF 'Day in the Life' uncovering. In a rare bare-all into his life, his career and his ambitions, it becomes clear; despite his meteoric rise, Weir still wants a lot of things - respect, a gold medal and just as importantly, to influence those around him while staying true to himself.

He had not heard his coach's comments.

"That means a lot coming from coach Mills knowing that you are in a club with a lot of well-respected athletes and world beaters and to know that coach Mills referred to you as the heart and soul of the club," Weir smiled. Perhaps the assessment also has something to do with his mood lifting, light-hearted approach to everything - even Mills' famously gruelling training session.

A neat 10.31 run in the 100m two Saturdays ago and some impressive work during the IAAF group's trip to his gym and track sessions at Spartan and the University of West Indies, respectively, showed that the Olympic bronze and World Championships silver medallist is not slacking off in his success.

"I want to go on the circuit and remain dominant, see if I can run some faster times and lower my personal best and see if I can run a really fast time in the 100m," said the 2013 Diamond League 200m winner.

But that's just a part of his ambition.

"A gold medal? It's important, nobody wants to remain at the same spot unless they have the gold medal already. I have a silver and a bronze and I'm working hard to get the gold and that's my ultimate goal in life; to get an individual gold medal at the Olympics or World Championships.

With Bolt and Blake blocking that path to the podium's summit, Weir knows he will have to put in the mileage and once again defy the odds if he is to achieve his dream. But he has done that before, and as his reputation and credibility in an event he is still learning continues to grow, so does his confidence.

"Its an amazing feeling seeing these guys on TV and now to be a part of that legacy. Training with the Gods of track and field, everyday is a lesson," Weir said.

"It's like winning at Champs when some of the big guns are out, so you have to prove yourself the other year. It was the same for me at the Olympics. I went there as a newbie and people said it was a fluke, but to go to the World Championships and run 19.79 for a silver medal, equalling my PR, it showed that it was not a fluke and I definitely got a lot of respect from the worldwide public and mainly from the local fans," said Weir. "When the local fans accept you then you know that you are ready for the world so to know that you are one of their favourites or that you are accepted here is a good feeling."

He eats at the same places and hangs out with the same friends he has had since primary school; it's an important part of who he is even as he accepts his new responsibilities.

"Fame hasn't changed me much, I am the same person - I do the same things and go the same places. I just know that I have to be more responsible because kids are looking up to me as a role model," said Weir, a case supported as he lunched at his regular spot - Auto Vision.

Great things come in small packages, and although he lacks the physically intimidating stature of his illustrious club-mates, he is already guaranteed a page in the chronicles of Jamaica's sprinting history. I wouldn't bet against him penning a chapter by the end of his career.