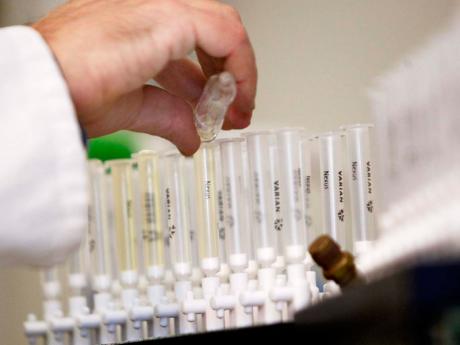 In this February 5, 2010 file photo, a laboratory technician prepares samples of urine for doping tests during a media open day, at the King's College London Drug Control Centre, London. - AP

The Jamaica Anti-Doping Commission (JADCO) has admitted that procedures, not consistent with the World Anti-Doping Agency (WADA) standards, were made during its sample collection last year.

JADCO's admission came a day after the Court of Arbitration for Sport (CAS) released the reasons why it cleared highly-decorated Jamaican sprinter Veronica Campbell-Brown of a doping violation.

In a 58-page ruling, the three-man CAS panel outlined "deplorable" mistakes by local anti-doping officials in the collection of the athlete's first partial sample. CAS said the errors could have led to the sample being contaminated by water or sweat containing a banned substance.

JADCO in their response stated that they have acknowledged that some procedures carried out in the sample collection process on May 4, 2013, at the Jamaica Invitational Meet at the National Stadium, in Kingston, were inconsistent with the World Anti-Doping Agency (WADA) International Standards. Specifically, no partial sample kits were used in the collection process.

"We, therefore, take this opportunity to state that there is no documentation in existence at JADCO, indicating that WADA gave the Commission permission to deviate from the standard, which is applicable to all signatories of the WADA Code," the release said.

The statement added that JADCO is currently restructuring, working in concert with its recently appointed chairman and board of commissioners, continues to refine and upgrade its operational procedures to remove any weaknesses in the system.

"As a result, we are continuing to recruit qualified employees to fill the necessary staff vacancies and assist in improving JADCO's testing capabilities and public education programme.

"In order to further strengthen the capacity of its testing programme, JADCO has taken the necessary steps to fully adhere to all the WADA International Standards, as we are now in possession of the partial sample kits."

JADCO said it has trained two additional Doping Control Officers (DCOs) and is currently in the process of recruiting additional DCOs and chaperones and recertifying the current list of doping control personnel.

In its ongoing effort to further build capacity, JADCO stated that they will be partnering with the Canadian Centre for Ethics in Sport (CCES) and WADA.

"JADCO and CCES will be signing a Joint Initiative Agreement shortly, for a period of 15 months, through which CCES will provide guidance, training and technical assistance to JADCO. This, the release said, will enable JADCO to benefit from the experience of a National Anti-doping Organisation with over 20 years of anti-doping knowledge and expertise."

Campbell-Brown tested positive for the diuretic HCT after competing in a national meet in Kingston on May 4, last year. The athlete was initially suspended provisionally by the International Association of Athletics Federations (IAAF). In September, a Jamaican disciplinary panel ruled that Campbell-Brown had not committed a doping violation and gave her only a reprimand. The IAAF contested the finding and ordered the Jamaican federation to impose a two-year suspension in February.

Campbell-Brown appealed to CAS and a hearing was held in London on February 21. The CAS found that Campbell-Brown established a "credible" possibility that her positive test resulted from Jamaica's failure to comply with the international standards for partial sample testing.