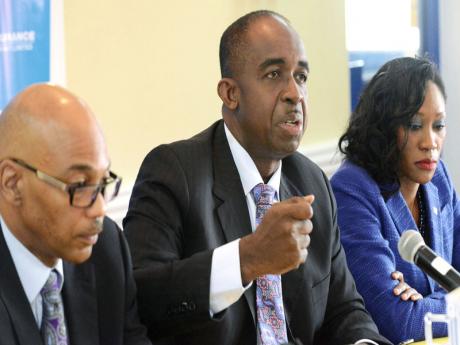 The banking sector is drafting an alternative proposal for presentation to Finance Minister Dr Peter Phillips aimed at convincing him to kill the financial transaction tax proposed on withdrawals and encashments.

Patrick Hylton, the group managing director of National Commercial Bank Jamaica (NCB), made the revelation Friday amid warnings that the new levy would add to his cost of operations.

Through the transaction tax, Phillips proposes to raise $2.25 billion from banks and securities dealers. He aims to raise another $1.8 billion by increasing the asset tax to 0.25 per cent on the same group, as well as other regulated financial institutions.

Hylton, while briefing the media and investors on his bank's quarterly performance - net profit totalled $2.99 billion for the quarter and $5.8 billion over six months - said that by devising other revenue options, the banking community was responding to the minister's invitation for other ideas that would plug his budgetary gap.

But he also signalled that the group was lacking some of the data needed to fine-tune its analysis.

He then echoed the position of the Jamaica Bankers' Association, of which NCB is a member, that the Government should avoid the appearance of repeatedly coming back to the "most compliant" for its needs.

"None of us are looking forward to playing any disproportionate role in relation to the resolution of this issue," said Hylton.

"I must also say that we recognise that there is a gap. The minister has said that he would welcome suggestions as to how to fill that gap. Right now, my focus is on trying to find some alternatives. We are trying to find a way to resolve this problem in a way which will be more acceptable, if not to all of us, to most of us," he said.

Hylton said he intends to have dialogue with the ministry before the close of the Budget Debate on Wednesday. That is when Parliament votes to approve the Budget and its funding package.

Hylton said the search for alternatives involved discussions with other banks, financial institutions, and other industry members. He said the banks were awaiting technical information needed from the Ministry of

Finance to design alternatives to the withdrawal tax.

Hylton said implementation of any new tax would mean increased costs, including adjustment of the bank's IT system, while directly avoiding comment on whether the withdrawal tax, if it survives, would lead to higher banking fees.

NCB is Jamaica's No. 1 bank by assets. Profit in the March quarter was up 72 per cent year on year; six-month profit rose 29 per cent. The March quarter of 2013 reflected $729 million of losses from the NDX and PDX debt swaps and foreign-exchange translations.

The banking group's loan book grew 17 per cent to $151 billion in the current review period amid total assets of $488 billion, which grew at a similar pace as loans. Its deposit base improved by $27 billion, or 16 per cent, to $198 billion.

Dennis Cohen, group finance and deputy managing director, reported that most business lines grew over the six-month period. The star performer was treasury and correspondent banking, which grew operating profit by $1.1 billion to $1.6 billion for the period.

Advantage General was acquired in February 2013, so its results did not reflect a full six months of activity.