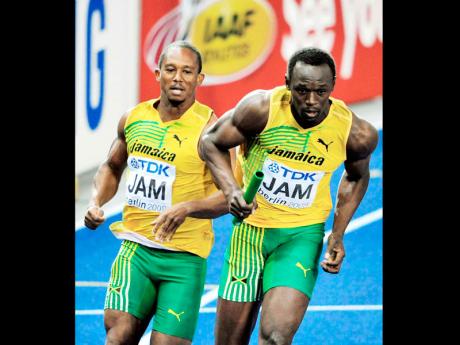 Jamaica's Michael Frater (left) passes the baton to Usain Bolt on their way to winning gold in the men's 4x100m relay at the World Athletics Championships in Berlin on Saturday, August 22, 2009.File

Sprinter Michael Frater looked much like his old self, burning up the track on the second leg for Jamaica in the USA vs the Rest of the World men's 4x100m at the Penn Relays on Saturday.

Frater's effort brought Jamaica into contention for first place but, in the end, Walter Dix barely got the better of Oshane Bailey on anchor to give the Americans a close 38.57 to 37.58 win over the Jamaicans inside the University of Pennsylvania's Franklin Field.

The 31-year-old, who, after recovering from a career-threatening knee injury was wearing national colours for the first time since helping Jamaica to a 4x100m gold medal and a World Record at the London Olympic Games in 2012, said he was happy to be back and is looking forward to once again competing at the highest level.

"Running in national gear brings out the best in me, I'm feeling good," Frater told The Gleaner, while sharing the difficulties experienced during his recovery.

"It's just about getting back healthy and competing at a high level, and I think step by step I will get there. I am taking it one meet at a time. With the injuries I have had, it's one meet at a time for me," said Frater, who ruptured ligaments in his knee in 2010, before being forced to do an operation in 2012.

"It's been very difficult. Last year was very frustrating, trying to run and couldn't run. Many days I couldn't even warm up, but there were people along the way that helped me, so I was able to take it in stride," he added.

"The Racers training group has been wonderful, and welcomed me with open arms and helped me along the way. I thank them for helping me to prolong my career," he added, of his move away from the MVP Track Club in early 2013.

Frater, the 2005 World Cham-pionships 100m silver medallist, said that he would have preferred to have been booked for this Saturday's Jamaica International Invitational. However, he will be competing in St Maarten this weekend in his first 100m of the year.

"I was hoping to run at the Invitational, but I didn't run enough this year, so they passed up on me. But I will be going to St Maarten on the same day. It's a very good meet, I have competed there a few times," Frater said. "Of course, I would have preferred to run in Jamaica in front of the home crowd; that brings out the best in me. Apart from putting on the national gear, running in front of the home crowd is the next best thing."