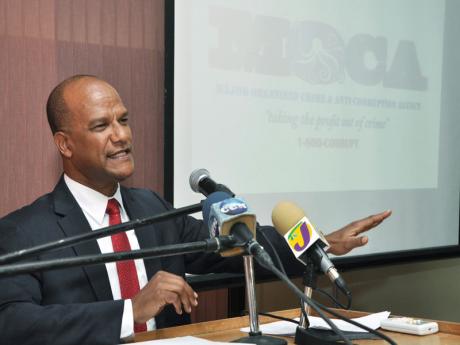 Peter Bunting, minister of national security, speaks during a press conference at the Police Officers' Club yesterday, where he revealed that there have been more than 600 arrests since March 2013 when the lotto scam legislation was enacted.-Jermaine Barnaby/photographer

Minister of National Security Peter Bunting has dismissed suggestions that lotto scammers are on the rampage more than ever.

Responding to queries from journalists, Bunting told a press conference yesterday that there have been more than 600 arrests since March 2013 when the lotto scam legislation was enacted.

Jamaican lottery schemes have reportedly been happening for many years, and the Jamaican and United States governments set up a task force in 2009 to stop the scam, but prosecutors in that country are suggesting that the problem has got worse, The Associated Press reported last Thursday.

Not so, declared Bunting. "Since the passage of the Law Reform Fraudulent Transaction Special Provisions Act about 15 months ago, over 600 persons have been arrested and charged under that piece of legislation," he stressed.

Bunting revealed that more than 20 cases have been carried through the court and every one has resulted in a conviction. "My feedback from the US law enforcement is that the US considered the level of cooperation as unprecedented," Bunting said.

Added Bunting: "Therefore, I don't think there is any basis to suggest that the situation has got any worse; I believe [it has] improved ... . Certainly from the intelligence that we get on the ground, the suggestion is that the scammers are under a lot of pressure."

Bunting characterised the Lottery Scam Task Force as one of the most highly productive units in the country. "This is not just limited to the security forces but of any organisation in Jamaica, but for a small unit within the Major Organised Crime Agency," he asserted. "The over 600 arrests with convictions to all that came through the system is an excellent record."

The national security minister had promised early prosecution of scammers who have been destroying people's lives and damaging Jamaica's name internationally, when the bill went through the Houses of Parliament, with the Opposition giving unequivocal support.