Countries try to cope as tens of thousands arrive 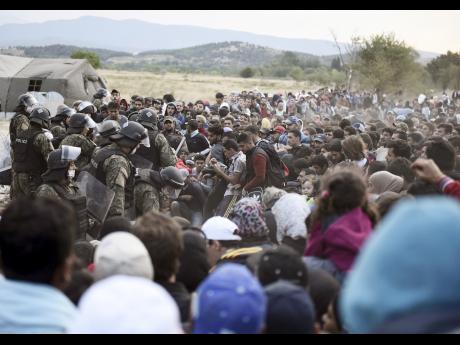 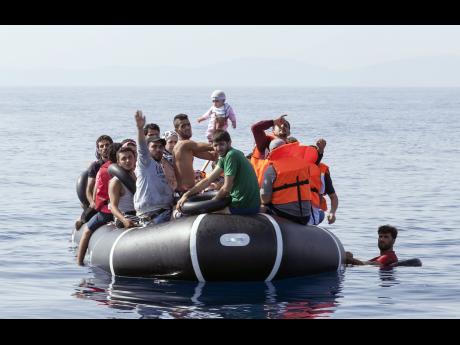 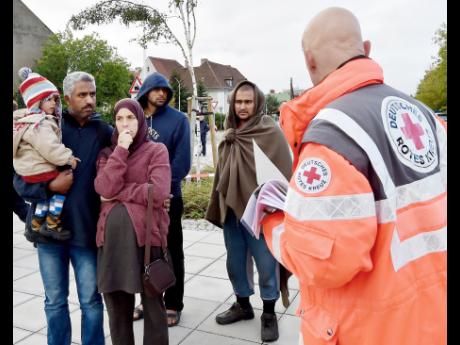 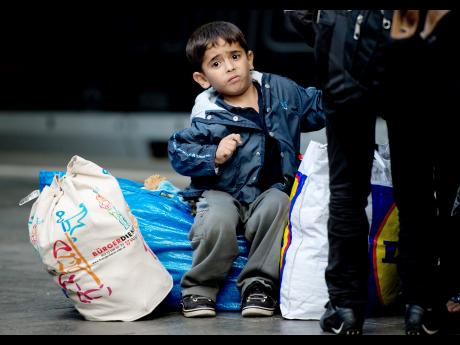 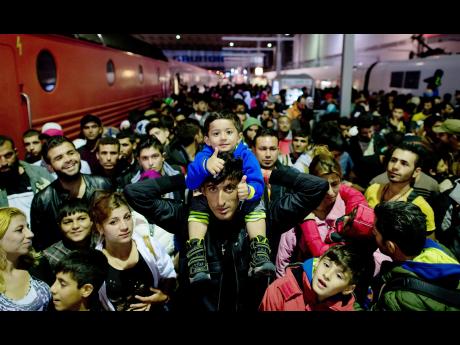 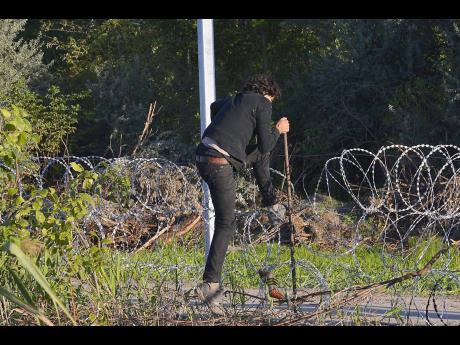 AP
A migrant enters the territory of Hungary by crossing the temporary protection fence along the Hungarian-Serbian border at Roszke, 180 km southeast of Budapest, Hungary on Monday, September 7. 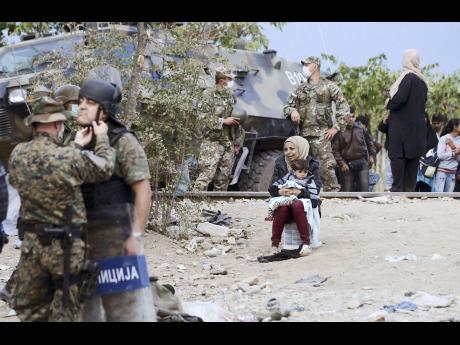 AP
AP A mother sits with her baby as other refugees and migrants wait to pass the borders next to Macedonian policemen from the northern Greek village of Idomeni, to southern Macedonia, Monday, September 7, 2015. The country has borne the brunt of a massive refugee and migration flow of people heading into the European Union. 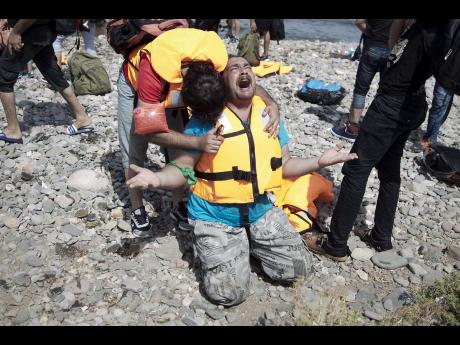 AP
Syrian refugees react as they arrive after crossing aboard a dinghy from Turkey, on the island of Lesbos, Greece,yesterday. The island of some 100,000 residents has been transformed by the sudden new population of some 20,000 refugees and migrants, mostly from Syria, Iraq and Afghanistan. 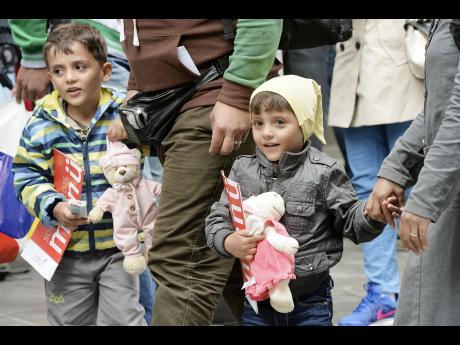 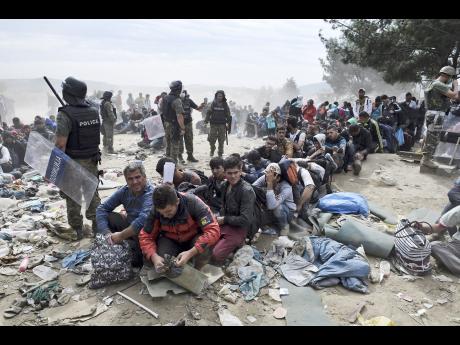 AP
Refugees and migrants wait to cross the border from the northern Greek village of Idomeni to southern Macedonia, yesterday. Greece has borne the brunt of a massive refugee and migration flow of people heading into the European Union. 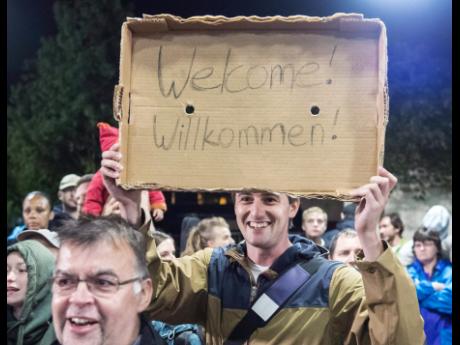 AP
A man holds a ‘Welcome’ sign during the arrival of refugees at the train station in Saalfeld, central Germany. Hundreds of refugees arrived in a train from Munich to be transported by buses to an accommodation centre. 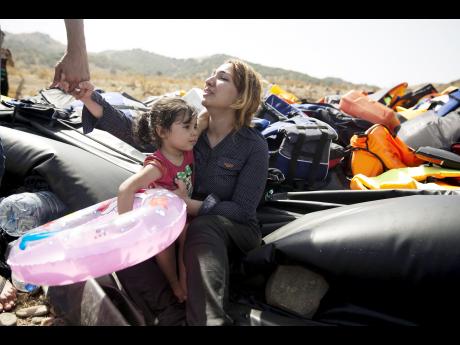 British Prime Minister David Cameron says the United Kingdom will re-settle up to 20,000 Syrian refugees from camps in Turkey, Jordan and Syria over the next five years.

He told Parliament Monday that Britain has a moral responsibility to act, citing shocking images in recent days. Cameron said vulnerable children and orphans will be given priority.

Cameron plans to outline his proposal when Parliament reconvenes after its summer recess. His government has indicated that the international aid budget will be used to help Syrians get started in Britain.

The government plans to bring refugees from camps neighbouring Syria into Britain but is not planning to accommodate those who have already entered Europe. Britain has also added to the financial aid it is providing to refugee camps in surrounding countries.

Cameron has for months had insisted that it made more sense to provide more aid rather than bring people to Britain.

New arrivals will be given five-year "humanitarian protection" visas upon arrival in Britain.

Two Italian navy ships have ferried to shore 60 bodies of migrants from the April shipwreck in which as many as 800 perished.

The navy says the corpses, transported Monday to Sicily, bring to 118 the number of bodies recovered using navy divers and robots.

Prosecutors who viewed film taken by divers of the boat's interior say the images support testimony from the few survivors that some 800 people were aboard when the vessel capsized as rescuers approached, with hundreds trapped in the hold.

The body retrieval operation is in its third month.

Meanwhile, Italy's coast guard was searching the waters between Libya and Sicily after 107 survivors rescued from an overcrowded dinghy told authorities some 20 persons fell overboard and their smugglers wouldn't stop to pick them up.

Scuffles broke out early Monday between Macedonian police and thousands of refugees and migrants attempting to head north toward Europe.

About 2,000 people had gathered at the Greek border near the village of Idomeni just after dawn, attempting to cross into Macedonia. But Macedonian authorities were allowing only small groups to cross every half hour, leading to tension. The situation later calmed after more were allowed to cross, with about 1,000 having passed the border by mid-day.

Greek police said about 5,000 people had crossed the border heading north in the 24 hours from Sunday morning to Monday morning.

Scuffles at the border have become near-daily as an increasing wave of people fleeing conflict and poverty in the Middle East and parts of Asia have headed to Greece from Turkey, aiming to cross the Balkans overland toward Austria, Germany and Scandinavia.

Greece's migration minister Giannis Mouzalas says at least two-thirds of the estimated 15,000-18,000 refugees and economic migrants stranded in "miserable" conditions on the eastern Aegean island of Lesbos will be ferried to the mainland in the next five days.

Mouzalas said extra ferries were laid on Monday to transport the migrants, while some ships will serve as temporary screening and reception centres.

Lesbos bears the brunt of the refugee influx, with more than 1,000 arriving daily on frail boats from nearby Turkey. Most remain stuck there for days, sleeping outdoors until they can be identified, and then find berths on crowded ferries to the mainland.

Greece's caretaker government, appointed ahead of elections on September 20, has set the problem as its main priority, significantly improving its predecessors' stumbling efforts to deal with the influx.

Greece says it has requested emergency European Union assistance to deal with the massive influx of refugees and migrants who reach its eastern islands daily on frail boats from nearby Turkey.

More than 230,000 people have arrived so far, at a rapidly increasing pace, and have overwhelmed authorities in the financially struggling country that has become Europe's main gateway for migrants.

The Interior Ministry said Monday it has applied for activation of a European mechanism for civil protection assistance, which it said would be of "crucial importance" in improving migrants' reception facilities - which are, at best, rudimentary.

A ministry statement said Greece has provided detailed information on what it needs in terms of medical and pharmaceutical supplies, equipment for reception centres, clothing and personnel.

Spanish media say police fired rubber bullets at migrants in a detention centre in the southern city of Valencia after about 50 tried to escape.

Media, including the leading El Pais and El Mundo newspapers, say the disturbance started late Sunday night when a guard was assaulted and migrants took his keys. Reports say some went on to the roof of the building and threw stones and branches at guards while others burned mattresses in an outdoor area of the centre.

Authorities responded with rubber bullets and put down the disturbance about two hours after it started.

Spanish media say most migrants at the Valencia detention centre are from sub-Saharan Africa.

French President Francois Hollande says his country will welcome 24,000 refugees. In a speech ahead of a wide-ranging press conference, the Socialist says taking in those fleeing war is a duty that France is ready to shoulder.

He said he and German Chancellor Angela Merkel had agreed upon a mechanism to distribute refugees across Europe.

German Chancellor Angela Merkel told reporters in Berlin on Monday that "we have a moving, in some parts breathtaking, weekend behind us."

Merkel said Germany will ensure that those who need protection receive it, but that those who stand no chance of getting asylum will have to return to their homes swiftly.

She also stressed that Europe's biggest economy isn't willing to shoulder the whole refugee burden alone, saying that "Germany is a country willing to take people in, but refugees can be received in all countries of the European Union in such a way that they can find refuge from civil war and from persecution."

The German government says it will spend €6 billion (US$6.6 billion) next year to support the hundreds of thousands of migrants coming to Germany.

German officials recently predicted that up to 800,000 migrants will arrive by the end of the year, many of them refugees fleeing war and persecution in Syria, Iraq and Eritrea.

Hungary's Prime Minister Viktor Orban has mocked the European Union's (EU) efforts to distribute migrants with a quota system and is casting Hungary as the "black sheep" standing up against EU leaders in contrast with the other countries in the "flock".

Orban told a meeting of Hungarian diplomats on Monday that the EU migrant quota, which would distribute migrants among the bloc's 28 countries, makes no sense in a system where the free movement of people would make it impossible to enforce.

Orban said "How is this going to work? Has anyone thought this through?"

Orban also said that migrants who had kept going after reaching safe countries like Turkey or Macedonia "want to live a German life. It has nothing to do with security."