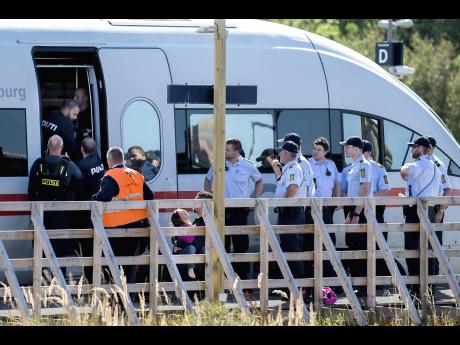 AP
A small girl cries as she is removed by the police from an train in Rodbyhavn, approximately 5 km southwest of the town of Roedby, Denmark, yesterday. Danish railway company DSB says all train service has been halted between Germany and Denmark after Danish police stopped hundreds of migrants arriving by train across the border. 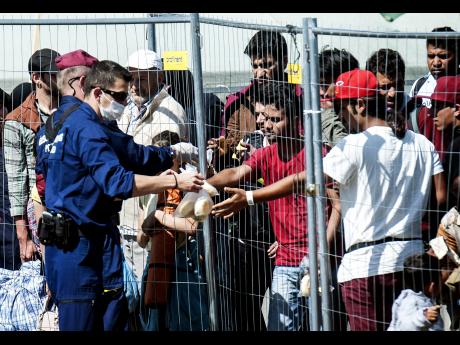 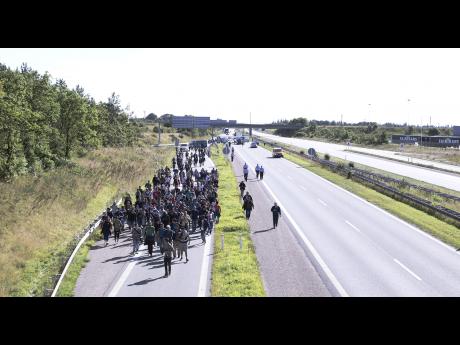 AP
Around 300 migrants walk north on a highway escorted by police in southern Denmark yesterday. The migrants have crossed the border from Germany, and after staying at a local school, they say they are now making their way to Sweden to seek asylum.
1
2
3

Danish railway company DSB says all train service has been halted between Germany and Denmark after Danish police stopped hundreds of migrants arriving by train across the border.

Danish police spokeswoman Anne Soe says about 100 migrants who arrived from Germany yesterday are refusing to leave a train in the Danish port city of Roedby. She says they don't want to be registered in Denmark.

Under EU rules, people seeking asylum should do so in the first European Union (EU) country they enter and not travel from one country to another.

Many of the migrants say they want to go to Sweden, Norway or Finland, because they have relatives there or believe that the conditions for asylum-seekers are better.

Police in southern Denmark have shut down a section of the highway north of Padborg on the Danish-German border after a large group of migrants left the place where they were staying after entering Denmark by train from Germany, and started walking on highway. According to Denmark's TV2, they are chanting "Sweden! Sweden!".

Also in southern Denmark, police stopped three trains with migrants who had crossed the strait separating northern Germany and the Danish island of Lolland. A group of up to 35 who fled earlier in the day from the ferry terminal in Roedby have now returned, they said.

German Chancellor Angela Merkel has renewed her demand for compulsory sharing of refugees among European Union countries and insisted that the migrant crisis is a challenge for every nation in the 28-member bloc.

Merkel addressed the German parliament's annual budget debate yesterday just as the head of the European Union's executive, Jean-Claude Juncker, called for the compulsory relocation among EU countries of another 120,000 refugees.

Merkel said "it would be a step if we achieved what Jean-Claude Juncker is proposing today" but that the challenge is deeper than just sharing refugees.

Czech Prime Minister Bohuslav Sobotka says his government's opposition to mandatory quotas for accepting migrants in the EU member states has not changed.

"The compulsory quotas are not a good solution," Sobotka said in a statement. "To continue with a discussion about their Establishment all across Europe only prevents us from taking really important and necessary steps."

The Czechs argue most of the migrants have been heading for Germany and don't want to stay in the Czech Republic.

Last Friday, the prime ministers of the Czech Republic, Hungary, Slovakia and Poland rejected calls by Germany and some other EU members for compulsory sharing of refugees.

The UN High Commissioner for Refugees has appealed for an extra US$30.5 million to help deal with Europe's refugee crisis. Meanwhile, funding shortfalls have forced the UN to cut food aid to refugees in countries neighbouring Syria over recent months.

Steinmeier, whose country holds the Group of Seven presidency, said Wednesday he will organise a meeting of G-7 countries and Syria's Arab neighbours when the UN General Assembly meets later this month.

The United Arab Emirates has defended its response to the Syrian refugee crisis in the face of criticism that oil-rich Gulf states should be doing more to address the issue.

In a statement provided to The Associated Press, the Emirati government said it has provided residency permits to more than 100,000 Syrians who have entered the country since 2011, and that more than 242,000 Syrian nationals currently live in the country. It did not provide details on the terms.