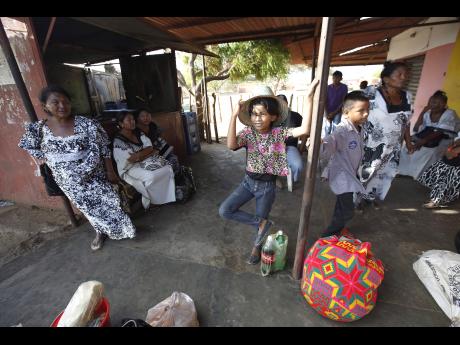 AP
A Wayuu family rests after crossing from Venezuela at an unofficial border point to attend a relative’s funeral in Paraguachón, Colombia, on Wednesday.

Less than two days after Venezuelan President Nicol·s Maduro closed this lonely border outpost on the northern tip of South America, the eight-member Apochana family emerged from the dusty scrubland and shuffled up to a group of Colombian soldiers. The travellers were dripping sweat, but dressed impeccably in black-and-white linen robes to attend a relative's funeral on the other side of the border.

Cecilia Apochana, the matriarch of the Wayuu family, complained that promises tribe members would be able to move freely between the two countries despite the closure haven't rung true.

"We've been walking an hour along a trail and have had to pay several people to let us get this far," said Apochana. Although never stopped by authorities, the extra time and effort to circumvent the closure still burns. "This is our land and there should not be a border, much less that it be closed."

The Apochana family's saga is one that may soon be shared by many of their 600,000 Wayuu brethren. For centuries, this seminomadic tribe has managed to dominate life on the foreboding La Guajira peninsula, first resisting conquest by Spain and since independence, freely crossing the Colombian-Venezuelan border that arbitrarily divides clans in their ancestral homeland.

But a deepening dispute between Maduro's socialist government and United States (US) ally Colombia may force them to pick sides.

On Monday, Maduro ordered the single drive-through checkpoint here closed, expanding to four the number of border crossings shut in the past three weeks as part of a campaign to root out the smuggling of gas and basic goods he blames for widespread shortages. Venezuela says that almost 40 per cent of its goods are smuggled out of the oil-rich country, costing it US$2 billion a year.

From the look of things, the restrictions on movement seem far from impenetrable.

A five-minute walk from the army checkpoint where the Apochana family stopped to rest, Alberto Herrera lords it over his own makeshift toll straddling a dirt road crossing the border. He raises and lowers a stretched rope for every motorist that coughs up 400 Venezuelan bolivars, under 60 US cents at the widely used black market rate, he's demanding. For motorcycles, it's a quarter of the price.

"I'm Venezuelan. I don't understand why I have to be passing illegally through these roads," protested Zuleia Gutierrez as she passed through on the back of a motorcycle.

The Wayuu don't carry passports nor do they recognise borders, and for decades, both Colombia and Venezuela have allowed them to cross La Guajira's desert as they please. As part of the anti-smuggling offensive, Maduro has vowed not to impinge on that freedom.

But tribal leaders say it's impossible they won't be economically asphyxiated by the crackdown.