Sentenced to 14 years for inciting violence 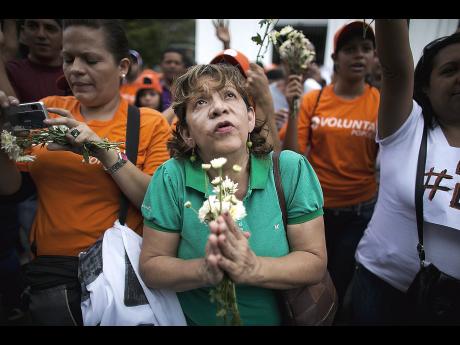 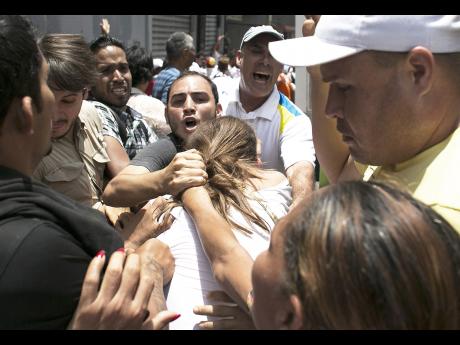 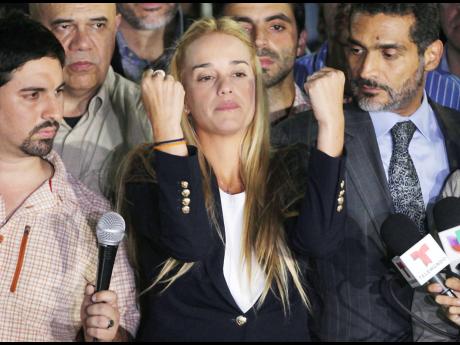 AP
Lilian Tintori, wife of Leopoldo Lopez, gestures during a news conference at Bolívar Square in the Chacao municipality, in Caracas, Venezuela. 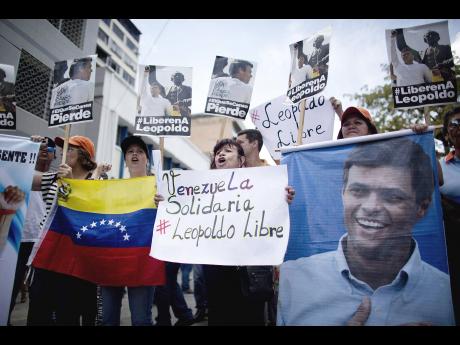 Venezuelan opposition leader Leopoldo Lopez has been sentenced to 14 years in prison for inciting violence during last year's sometimes bloody protests, with a judge handing down the maximum sentence in the high-profile trial, despite United States (US) calls for Lopez's release.

About 200 supporters of the country's most-prominent jailed opposition leader, gathered in a Caracas plaza, expressed disbelief and sadness late Thursday when they learnt of the verdict. Several wept and consoled each other with hugs.

Reflecting the passions stirred by the trial on both sides of Venezuela's deep political divide, an elderly man died and several people were injured earlier in the day during clashes outside the courthouse between government loyalists and Lopez supporters.

The opposition leader has repeatedly denied the charges and says he only urged peaceful demonstration against President Nicol·s Maduro. Venezuela's socialist government, however, blames him for the violence that left more than 40 people dead during the protests.

Supporters of the 44-year-old, Harvard-educated former mayor of a wealthy Caracas district, say the trial was marred by irregularities. The court rejected all but two defence witnesses, both of whom ultimately declined to testify, while letting the prosecution call more than 100.

The trial was all but closed to the public, and Lopez sometimes refused to attend in protest. His lawyers said Judge Susana Barreiros abruptly ended the proceedings last week, even though many witnesses had yet to take the stand.

Combined with time served, the sentence of 13 years, 9 months, 7 days, and 12 hours was the maximum punishment for Lopez's crimes.

The prosecution focused on Lopez's public statements last year when, under the slogan 'The Exit', he and other hardliners pushed for Maduro's resignation just months after pro-government candidates swept regional elections.

US officials deny that accusation and have made Lopez's release a key demand for normalising diplomatic relations. Secretary of State John Kerry phoned Venezuela's foreign minister Tuesday to express concern about the trial, days after meeting with Lopez's wife, Lilian Tintori, in Washington.

Activists present in the courtroom told The Associated Press that Lopez, in his closing remarks, looked at the judge and said that, if he were freed, he'd go home, kiss his children, ask again for his wife's hand in marriage, and then start all over again canvassing the country.

While many of Lopez's supporters never doubted he would be convicted, the stiff sentence came as a surprise to those who thought leniency would be shown in a bid to defuse tensions ahead of December's legislative elections, which the opposition is heavily favoured to win.

Lopez's lawyers vowed to appeal the ruling, and opposition leaders asked supporters to keep calm despite a ruling that seemed designed to provoke them.

Roberta Jacobson, the State Department's top diplomat for Latin America, said in a tweet she was "deeply troubled" by the verdict and called on Venezuela's government to protect democracy and human rights. International human rights groups, including Human Rights Watch and Amnesty International, also immediately condemned the ruling, and called on regional leaders to break their silence on abuses in Venezuela.

But at a rally of government supporters outside the courthouse before the verdict was read, a band played folk songs with lyrics supporting a guilty verdict.

"Hold him responsible," went the chorus to one song. The government did not immediately comment on the verdict.

Lopez, the father of two young children, has spent the past year and a half in a military prison outside Caracas, where he'll now complete the sentence. With only his family allowed to visit, he managed to release several videos from behind bars.

Polls say Lopez continues to be one of Venezuela's most popular politicians, with approval numbers approaching 50 per cent, while Maduro's languish below 30 per cent.